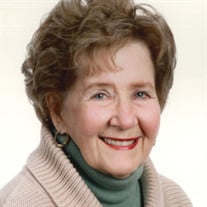 Lillian Louise (Parker) Hulbert was born November 15, 1928 to parents, Wesley and Ina Parker. Her birth was on the family farm just outside of El Reno, OK. Lillian was the youngest of five children. Her oldest sister (Thelma) was 13 years older... View Obituary & Service Information

The family of Lillian Hulbert created this Life Tributes page to make it easy to share your memories.

Send flowers to the Hulbert family.