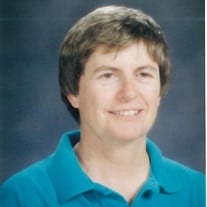 With sadness we announce the passing of Linda Mae Gunning, age 74, of Broken Arrow, OK, passed away on Tuesday, November 16, 2021, at St. Francis Hospital in Tulsa. Linda was born October 8, 1947, in Norman, OK, the daughter of the late R. Boyd Gunning and Eleonore Aderhold Gunning. Linda was a kind and outgoing woman who made friends wherever she went. She dedicated her professional career as an elementary school physical education teacher in the Tulsa Public Schools. Her life touched and helped many families through her years as a teacher and her work with Special Olympics. An outstanding athlete, Linda competed in school athletics before Title IX. In elementary school, her three-run homer advanced her McKinley team to the finals. While in junior high, she trained with the great swimming coach Matt Mann when he was at the University of Oklahoma, but she did not have the opportunity to compete as a swimmer. During her high school years, she helped form a girls’ track team and was an outstanding hurdler. Due to lack of funding, her mother made the uniforms, which were powder blue instead of the traditional orange and black, for the Lady Tigers. Linda attended school in Norman and graduated from Norman High School. Women’s softball was a passion of Linda’s,or Gunner’s, as she was better known. Gunner loved to play but was also involved in the leadership responsibility of Adult Co-Ed softball in Tulsa. She was in charge of Tulsa Co-Ed Softball leagues in many capacities from 1968-1984. She treasured her years as a member of Kappa Kappa Gamma Sorority at the University of Oklahoma and her many close Kappa friends. She received a BS from Central State University in 1972, Edmond, OK. Her MS was from Northeastern State University 1983, Tahlequah, OK, also 40 hours of advanced study Linda taught elementary physical education for 30 years in the Tulsa Public School system. While at Eisenhower International School, Gunner was highly involved with the Great Expectations program. There were other committees, volunteering work that she involved which are to numerous to mention. She was a member of many professional organizations which include OAHPERD, SDAAHPERD, NEA, OEA, Tulsa Metro Retired Educators Assoc., plus many others which are to numerous to mention. She received many honors from several of these organizations. Linda is survived by her son and daughter, William Boyd Gunning and Amanda Jane Gunning, and also her longtime companion and friend Stella Waters. Other survivors include her brothers, D. Thomas Gunning and wife Linda of Oklahoma City, OK, and Richard Boyd Gunning and wife Vickie of Knoxville, TN, and her sister Mary Jean Greene and husband Richard “Rick” of Norman, OK. Also among the survivors are numerous nieces, nephews, and their families. Nieces and nephews are Michael (Vicky) Gunning, Alan Gunning, Daniel Gunning, Amy DeBusk, James Gunning, Kristy Gunning, Rhonda Gunning, Richard S. Greene Jr, and Elizabeth Greene. Linda loved all of them and all of their families very much, always keeping up with their lives and accomplishments. Preceding her in death were her parents, Boyd and Eleonore Gunning, her sister-in-law Betty Ann Hurst Gunning, and nephew David Brent Gunning. A Celebration of Life will be held at a later date. In lieu of flowers, family requests memorial contributions can be made to a charity of your choice. Arrangements have been entrusted to Floral Haven Funeral Home and Crematory in Broken Arrow. She will be laid to rest in Floral Haven’s “Spirit of Oklahoma” cemetery. Memorial Services will be 2:00 PM, March 19, 2022, at Central Church of the Nazarene, 7291 E. 81st St, Tulsa, OK 74133

With sadness we announce the passing of Linda Mae Gunning, age 74, of Broken Arrow, OK, passed away on Tuesday, November 16, 2021, at St. Francis Hospital in Tulsa. Linda was born October 8, 1947, in Norman, OK, the daughter of the late R.... View Obituary & Service Information

The family of Linda Mae Gunning created this Life Tributes page to make it easy to share your memories.

With sadness we announce the passing of Linda Mae Gunning, age...