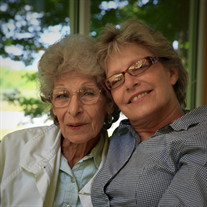 Linda Kay Thomas, 65, died peacefully in her sleep on February 20th, 2020 at her home in Wichita, Kansas. Linda Thomas was born on February 4, 1955 in Wichita, Kansas to Kathleen Whillock and was raised by Kathleen and Mearl Whillock, Sr. She graduated from East High in Wichita, where she made strong friendships that lasted throughout her lifetime. One of her achievements that she was most proud of, besides raising her son Sean, was being the first female cable television installer in Tulsa, Oklahoma. She was even selected to be the face of United Artists Cable Company’s ad campaign, where her image was shown on a huge billboard in town. Linda was quick to laugh and speak her mind, she loved music, comedy, and befriended every animal she met. Linda was preceded in death by her parents, Kathleen Whillock and Mearl Whillock, Sr. and her brother's, Jeffrey Bennett and Mearl Whillock II, as well as her husband, Bob Thomas. Linda is survived by her son, and daughter-in-law, Sean and Lindsay Whitworth. Flowers may be sent to Floral Haven Funeral Home. Donations can also be made in her honor to the National Multiple Sclerosis Society or Mental Health Association Oklahoma. Celebration of Life Service will be 12:30 pm, Monday, March 2, 2020 at Floral Haven Funeral Home Chapel.

The family of Linda Kay Thomas created this Life Tributes page to make it easy to share your memories.

Linda Kay Thomas, 65, died peacefully in her sleep on February...

Send flowers to the Thomas family.