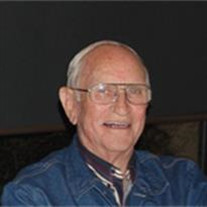 Lloyd was born at home in a small 2-bedroom house in Drumright, Oklahoma, where he lived until the age of 10. His memories of Drumright included riding his bike up and down the hills to deliver newspapers; and using the grapefruits given in the school cafeteria as balls which were rolled down “Grapefruit Hill” after school. The family then moved to an area of Tulsa known as the Sand Springs Line. He attended Riley Elementary, Roosevelt Jr. High and rode the street car to Central High School where he graduated in 1953. He worked at the high school performing various jobs including operating the elevator. He continued to keep in touch with many of his classmates and enjoyed attending class reunions. Lloyd and Anna attended Cherokee Worship Center. He enjoyed the relaxed atmosphere and the friendship of all the members. They also attended the Cherokee Jamboree two or three nights a week to listen to gospel and country music. Lloyd lived an active life. He enjoyed attending stock car races and Tulsa Oilers hockey games, roller skating, riding motorcycles, water skiing, riding four wheelers, and most recently being involved in local RV clubs. He also enjoyed sitting on the back porch watching the hummingbirds. Lloyd was a hard-working man who provided very well for his family. He worked at Page/Glencliff Milk Company for 28 years. Lloyd was an engineer who basically kept the company running. He was able to repair any type of machine and he developed various types of equipment. He put his heart and soul into that company and was so proud of his accomplishments. After the company closed in 1980, he worked as an engineer at the Tulsa Airport and then eventually developed his own successful business as a Facility Maintenance Manager at Dowell Research Center. He was by far the best refrigeration/air conditioning man around! Everyone looked to Lloyd for help if they needed something fixed. He could do it – whatever it was. He helped his kids tremendously and was always there to help neighbors. He always said “it’s simply awful when you don’t know, and awfully simple when you do know.” Lloyd had a host of friends, which has been evident these past few days. Thanks to everyone who visited and has shown such loving support to him and his family. The Cartwright family would like to recognize Dr. Lance King and Dr. Michael King and thank Saint Francis Hospice for their tremendous care and support. Janie, Candace and Mary Ann have been awesome. We thank you so much for taking such wonderful care of him and for the support you have given us. He “loved” all three of you. We would also like to extend a special Thank You to Walter Still for his compassion and assistance during this difficult time.Survived By: Lloyd is survived by his wife of 54 years, Anna Mae (West), and two children; Robert Cartwright and wife Judy of Owasso; Renda Sherrell and husband Jody of Tulsa. He is also survived by grandchildren Joseph and Amanda Sherrell, Reanna and Victor Abarca, Justin Sherrell, Brian Cartwright, Brent Cartwright, Linda Thompson, Jason Thompson, Katie Jansen, Rachel Jansen & Heather Davis. His great-grandchildren were his pride and joy: Braden “Tom” Abarca, Makenzie Grace Sherrell. Dalilah Thompson and Tristan Walker. He was so proud of having a four-generation family. Lloyd is also survived by his “lil’ brother”, Neal Cartwright and wife Linda, brother-in-law Ernest Latta, and two sisters, Jewell Austin and husband Wayne, and Carolyn Lowery and husband Willie and numerous nieces and nephews. He was preceded in death by his parents, John and Delours Cartwright, brothers Fred, Norm, Cletus, Melvin and Gene Cartwright; sisters Juanita Sivadon and Pauline Latta.

Lloyd was born at home in a small 2-bedroom house in Drumright, Oklahoma, where he lived until the age of 10. His memories of Drumright included riding his bike up and down the hills to deliver newspapers; and using the grapefruits given in... View Obituary & Service Information

The family of Lloyd Cartwright created this Life Tributes page to make it easy to share your memories.

Lloyd was born at home in a small 2-bedroom house in Drumright,...