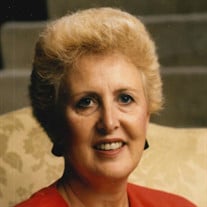 Lois Clarene Snell passed after a long battle with Alzheimer’s at the age of 78, February 6, 2022, in Tulsa, Oklahoma. She was born December 11, 1943, in Kansas, Oklahoma to Erven and Nora (Lamont) Luper. She attended school in little Kansas where she met and later married her husband, Douglas Snell. They were married on June 30, 1958, in Tahlequah, Oklahoma. In 1962, they welcomed their son, Darin followed in 1967 by a daughter, Shelley. She co-owned a fabric and notations store in Sand Springs, Oklahoma, for a few years. Clarene continued to do seamstress work after the store closure. Her prized project was making 2 Elvis costumes for a local Elvis impersonator. In the early ’80s Clarene obtained her realtor's license and joined Greene and Andress Realtors and later joined McGraw Davidson Realtors. During her real estate years, she served as the President of the Tulsa Chapter of Women’s Council of Realtors. In the late 90’s she worked as office manager of Tulsa Ceberal Palsy Association. Before retiring she worked at First Christian Church in downtown Tulsa as an administrative assistant. Clarene volunteered many years with Tulsa Cerebral Palsy Association and served in various positions before serving as President. During her involvement with TCPA, She enjoyed many years performing in the Red Glove Revue. Clarene was also a member of The Eastern Star. Upon retirement, Clarene and Doug traveled extensively whether it was cruises to such ports as the Panama Canal and Alaska or overseas trips to Ireland, Scotland, London, Mexico, Bahamas, and many places in the United States with her most favorite being Hawaii. They enjoyed day trips as well to the many casinos throughout northeastern Oklahoma. Her greatest joy was being Granny to her 3 grandchildren. She is preceded in death by her parents, Erven and Nora (Lamont) Luper; brother Wesley Luper and sister Doris Kelley. She is survived by her husband Douglas Snell; her son Darin Snell and his wife Susan of Tulsa; daughter Shelley Havig and her husband Adam of Tulsa. Granddaughter Brooke Havig of Houston, Texas; Grandson Jonathan Snell of Meridian, Idaho and Granddaughter Rebecca Snell of Tulsa, Oklahoma. Also, survived by brother and sisters-in-law and many nieces and nephews. Viewing and visitation will be at Floral Haven on Friday, February 11nd, 2022 at 4-6 PM.

Lois Clarene Snell passed after a long battle with Alzheimer&#8217;s at the age of 78, February 6, 2022, in Tulsa, Oklahoma. She was born December 11, 1943, in Kansas, Oklahoma to Erven and Nora (Lamont) Luper. She attended school in little... View Obituary & Service Information

The family of Lois "Clarene" Snell created this Life Tributes page to make it easy to share your memories.

Lois Clarene Snell passed after a long battle with Alzheimer’s...

Send flowers to the Snell family.