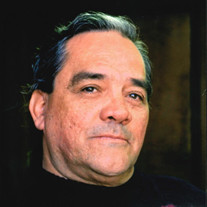 Loren Louis Daly Pahsetopah, 86, of Tulsa passed away October 8, 2020 at his residence surrounded by family and loved ones. He was born September 10, 1934 in Pawhuska, Oklahoma to Lorraine and Christopher Pahsetopah. Loren attended schools in Pawhuska and Chilocco Indian School. He was honorably discharged from the Army National Guard of Oklahoma in 1954. He began his career as a self-taught Native American artist. He was chosen to represent his country and his ancestry on a trip to Europe where he displayed his work at Au Bon Marche in Paris in 1966. He returned to Europe in 1968 and displayed his work at Harrods in London. His art can be found all over the United States as well as in other countries. He was a devout Roman Catholic and served as an altar boy at Immaculate Conception Catholic Church in Pawhuska. His love of hunting and fishing began as a boy and lasted all of his life. Loren was preceded in death by his parents, Lorraine and Christopher Pahsetopah, his brother, Paul Pahsetopah, his sister, Diane Simmering, his first wife and mother of his 8 children, Virgie Reed, his second wife, Tonnie Choate, his son, Paul Anthony Pahsetopah and his daughters Elaine Taylor and Mary Hynes. Loren is survived by his sister Catherine Pahsetopah of Allerton, Iowa, his son, Christopher Spencer Pahsetopah of Tulsa, his daughters, Lorna Ann Wilkins of Tulsa, Theresa Pahsetopah of Okmulgee, Monette Harjo of Wewoka and Gwyn Pahsetopah of Euless, Texas, as well as his numerous grandchildren, great-grandchildren and great-great-grandchildren. The Pahsetopah family would like to thank everyone for their thoughts and prayers during this trying time. Loren will be laid to rest at 11:00 am on Saturday, October 31, 2020 in the Pierce St. John Cemetery southeast of Pawhuska Oklahoma. Regretfully, due to Covid-19 and social distancing the graveside ceremony will be limited to family only. The family would also greatly appreciate your continued prayers during their time of grief.

Loren Louis Daly Pahsetopah, 86, of Tulsa passed away October 8, 2020 at his residence surrounded by family and loved ones. He was born September 10, 1934 in Pawhuska, Oklahoma to Lorraine and Christopher Pahsetopah. Loren attended schools... View Obituary & Service Information

The family of Loren Louis Daly Pahsetopah created this Life Tributes page to make it easy to share your memories.

Send flowers to the Pahsetopah family.