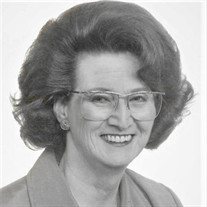 Lorice McBride, 81year-old resident of Broken Arrow, OK, passed away on June 3, 2020. She was born October 4, 1938 in Chickasaw, Alabama, and served her community for many years as a flight instructor, cosmetics and nutrition consultant, and... View Obituary & Service Information

The family of Lorice McBride created this Life Tributes page to make it easy to share your memories.

Send flowers to the McBride family.