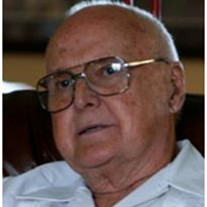 Louis E. “Fitz” FitzSimons, M.D. Â Louis E. â??Fitzâ? FitzSimons, M.D. passed away on November 29, 2011. He was born in Parris Island, South Carolina on October 19, 1925 to Louis and Ernestine FitzSimons. His father was a physician with the U.S.Navy and the family moved frequently throughout the states. Fitz served his country in the Army Air Force during WWII from 1943 to 1945. His two great desires were first, to fly airplanes and secondly to become a physician. Therefore at the end of the war, he enrolled in Emory University in Atlanta, Georgia for his undergraduate degree. Fitz attended the Medical College of South Carolina where he received his M.D. degree and Bowman Gray School of Medicine of Wake Forrest College for the specialty of Urology under the sponsorship of the U.S. Air Force. Fitz opened the Urology unit at Andrews AF Base Hospital in Washington, D.C. and served as Chief Urologist for several years before moving to Tulsa in 1963. Fitz was in the private practice of Urology and a member of the active staff of St. Francis Hospital until his retirement in 1995. He loved the practice of medicine and most of all he loved his patients, many of whom became his dear friends. Fitz loved nature and the great outdoors and delighted in fishing, hunting, sailing and camping with family and friends. His favorite places on this earth were in the mountains of Colorado, where the family camped many summers, and the seashores of California where he explored and played as a young boy. Fitz was a member of many medical and military organizations and was a member of Christ United Methodist Church. He is survived by his wife of forty four years, Rachel Wood FitzSimons, one daughter Annette Rosell and husband John of Claremore, two sons, John FitzSimons and wife Deborah of Tulsa, Robert FitzSimons of San Antonio, TX, two step-sons, Steven Kreidler and wife Holly of Edmond, Mark Kreidler and wife Colleen of Davis, CA, one step-daughter Kay Janssen and husband Gerald of Leeâ??s Summit, MO, grandchildren; Toby FitzSimons and wife Mandy, Cody FitzSimons, Kelley FitzSimons, Sean FitzSimons, Rachel Janssen, Greg Janssen, Patric Kreidler and Ryan Kreidler. He is also survived by one sister, Olivia Mauritson of Tulsa, and numerous nieces, nephews, in-laws and friends. He was preceded in death by his parents and a sister, Ernestine Buckley. Services will be held at Christ United Methodist Church on Monday, December 5th at 11:00 am. The family has requested that in lieu of flowers, you may wish to make a memorial donation to Christ United Methodist Church at 3515 S. Harvard, Tulsa, OK 74135 or James E. Bracy Disabled American Veterans, Chapter 32 at 3131 E. Pine St., Tulsa, OK 74110.

The family of Louis E FitzSimons,Jr. created this Life Tributes page to make it easy to share your memories.