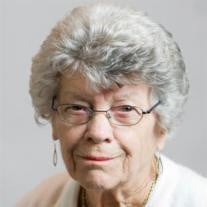 Lucy Ellen Murray, 83, passed away on December 18, 2012. She was born on August 14, 1929, to Burr R. and Marguerite (Dunlap) Reynolds in Bartlesville, Oklahoma. After she graduated from College High School in Bartlesville in 1947, she attended Oklahoma A&M College. She then went to work at Cities Service Oil Company where she met her future husband, Robert P. Murray, whom she married on July 2, 1953. She continued working until she became a mother and full time homemaker, settling in Tulsa, Oklahoma in 1971. Lucy was a long time member of the Kirk of the Hills Church in Tulsa. She enjoyed golf, bowling, and traveling. She has joined her loving husband, Bob of 58 years, who preceded her in death in 2011. Also preceding her in death were her parents, two brothers, Dunlap Reynolds and James Reynolds and two sisters, Louise Reynolds and Helen Fitch. Lucy is survived by her five children and their spouses: Debbie and Alan Overturf of Broken Arrow, Oklahoma, Mike and Susie Murray of Pittsburgh, Pennslyvania, Tom and Karen Murray of Clinton, Oklahoma, Andy and Karen Murray of Katy, Texas, and Pat and Chris Murray of Elmwood Park, Illinois. She had thirteen grandchildren: Cody Francisco, Jessica and Chris Ducker, Madison and Mark Tate, Jason Murray, Zachary Murray, Katie and Justin Booth, Molly Murray, Joshua Murray, Taylor Murray, Tara Murray, Marguerite Murray, Alison Murray and Connor Murray. She also had two greatgrandchildren: Everett and Graham Ducker. Also surviving her are two sisters: Lina Steele Reynolds of Oklahoma City, Oklahoma and Roberta Thomas of Aline, Oklahoma. Graveside services will be held at Floral Haven Cemetery at 10:00 AM, Friday, December 21, 2012, followed by a memorial service at Kirk of the Hills Church at 11:00 AM. In lieu of flowers, donations may be made to the American Cancer Society, the Multiple Sclerosis Society or the Kirk of the Hills Church.

Lucy Ellen Murray, 83, passed away on December 18, 2012. She was born on August 14, 1929, to Burr R. and Marguerite (Dunlap) Reynolds in Bartlesville, Oklahoma. After she graduated from College High School in Bartlesville in 1947, she attended... View Obituary & Service Information

The family of Lucy Ellen Murray created this Life Tributes page to make it easy to share your memories.