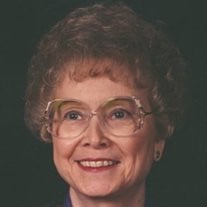 Luella Denton-Dorrough (Luella Rose Scott Denton-Dorrough) was born on May 17, 1928 in Tulsa to her Parents: Edward & Hattie Scott. Luella was the 3rd of 4 children: Jean and Edward Jr., deceased, and Anne Scott Windolf, Nashua, IA.She graduated from Central High School in Downtown Tulsa, Class of 1946. She also graduated from Business School and pursued a career as a secretary, working for the Tulsa World and Deep Rock Oil Corporation, among others. She retired from the business world in the mid-1950s to become a full time mother and homemaker, a position she excelled at for the rest of her life. She married Ray L. Denton on October 18th, 1947.Luella lived most of her life in Tulsa, though Ray’s long career at Alcoa would eventually have the family living in Benton and Little Rock, Arkansas; Kingston, Jamaica (B.W.I.); Pittsburgh, PA; Palestine, TX and finally back to Tulsa after Ray retired from Alcoa and went to work for Sun. The years in Jamaica were quite an eye-opener, full of lots of challenges and surprises, but also a look at an entirely different world. For a woman who lovingly grew roses and irises, Jamaica was a treasure trove of botanical delights, even if other parts of that island experience were a little less enjoyable.Luella had been a member of Memorial Baptist Church in Tulsa for many years, and later joined Parkview Baptist Church.Luella married C.L. Dorrough on March 19th, 1995. The Dentons and Dorroughs had known each other for several years through church, and after Mom and C.L. lost their long time partners, it was no surprise that they bonded in their later years. Luella and C.L. lived in Broken Arrow, OK.Luella had a strong and abiding faith throughout her life that saw her though good times, challenges and the loss of two husbands to lengthy illnesses. She is now rejoined with her parents, brother, partners and her Lord.Luella is survived by sons: Ron Denton, Tulsa; Mike Denton, Charlotte, NC; Steve Denton, Tulsa; 7 grandchildren and her sister: Anne Windolf, Nashua, IA.Memorial and Celebration of Life Service will be Thursday, Oct. 17th, 3 PM at Floral Haven Chapel.Memorial Contributions can be made to Grace Hospice.

The family of Luella Rose Denton – Dorrough created this Life Tributes page to make it easy to share your memories.