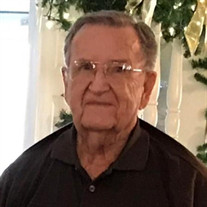 M. Wayne Holland of Broken Arrow went home to be with the Lord on Sunday, October 24., 2021 at the age of 89. A celebration service honoring his life will be held at Arrow Heights Baptist Church at 1:00 pm on Thursday, October 28, 2021. Wayne was the youngest of five siblings and was born at their family home in Boynton, Oklahoma on January 27, 1932, to Ernest Howard and Juell Priscilla (Jeffries) Holland. He grew up in the Muskogee area and graduated from Muskogee High School in 1949. He played the clarinet in the high school band and was active in his youth group and youth choir at Central Baptist Church. It was through the youth group that he met and married beautiful Barbara June Wynn on February 22, 1953. He shared that he couldn’t believe he “Got her.” Wayne graduated from Northeastern State College in 1953 earning a business degree, with minors in math and music. He originally wanted to become a full-time music minister, but he said that wasn’t to be; however, he was a part-time music director throughout most of his adult life. His first full-time job was with Goodyear. The company transferred him to Broken Arrow, Oklahoma in 1963, which was when the family joined Arrow Heights Baptist Church. After 10 years with Goodyear, he went to work for Shell Oil Company and retired after 25 years as a Systems Analyst. Wayne and Barbara enjoyed traveling, not only for the sights and experiences but also for treasured memories they created with the loved ones who joined them from ski trips in New Mexico to Golfing on the Hawaiian islands. Wayne also loved his time singing with the Singing Churchmen of Oklahoma, directing many youth and adult choirs as well as the Senior Adult Choir at Arrow Heights. He also loved singing with the Goldtones, his quartet plus one or two, throughout the years. Carpentry was another of Wayne’s many talents. He crafted both big and small projects for his family and church and was always happy to do it. Wayne was a pillar of his immediate family and will be greatly missed. We know he is probably singing with his 4 siblings who preceded him and death—Loyd, Lola, Freda, and Charles—as well as his parents. In fact, he is probably directing them and anyone else who will join in a heavenly choir. Left to cherish his memory are his wife of 68 years, Barbara of Broken Arrow · Daughter Denise Johnson and husband David of Broken Arrow and children Lori, Shannan, Ashley and Adam · Daughter Connie MacKinnon and husband Gordon of Broken Arrow and children Kendal, Matthew; Jason, Jared, Jonathan, Jeff and Jacob MacKinnon · Daughter Carrie Jacobson and husband Terry of Sand Springs and children Melody and Brent · 10 great grandchildren and a host of nieces and nephews and bonus relatives and dear friends

M. Wayne Holland of Broken Arrow went home to be with the Lord on Sunday, October 24., 2021 at the age of 89. A celebration service honoring his life will be held at Arrow Heights Baptist Church at 1:00 pm on Thursday, October 28, 2021. Wayne... View Obituary & Service Information

The family of M. Wayne Holland created this Life Tributes page to make it easy to share your memories.

M. Wayne Holland of Broken Arrow went home to be with the Lord...

Send flowers to the Holland family.