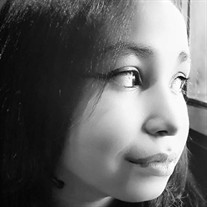 Makayla Jocelyn Gray was born on March 6, 2008 to Stephanie Myesha Danielle Gray and Christian James Gray. Makayla had a rough start in life as she was born pre-mature and spent her first days of life in the Newborn Intensive Care Unit at St. Francis Hospital in Tulsa. Makayla proved to be a fighter from the start. Early in life she battled as they placed a pacemaker into her little body; the beginning of a life long list of procedures she would face in life. As always, she was up for the challenge. Makayla went on to attend Broken Arrow Public Schools (in Tulsa): Kindergarten at Country Lane, Arrow Head Elementary, and Sequoyah Middle School. Throughout these years Makayla battled many adversities including multiple pacemaker replacements, being attached to a L-VAD (Left Ventricular Assist Device) named Harvey Heartwear by Mom and even a critical surgery to receive a new heart. Through all this, Makayla worked hard to get back to school and the friends she cared about. In her quest for excellence and her love for people, she worked hard. In school, Makayla was a member of the Safety Patrol and Chess Club. She also made the Honor Roll. She was active in church and sung in the choir at Words of Wisdom Ministries, pastored by her grandparents Wesley and Alfie Gray (pa-pa & mimi). Makayla's hobbies included: cooking, researching random subjects, teaching herself gymnastics, teasing her brothers (Michael and Malachi) and of course SINGING! You could never stop this girl from singing. Makayla shot for the stars. Her current dream was to become a District Attorney or a Baker. Why? She wanted to help and serve people. Makayla was a fighter and she fought the fine fight to the end. On Tuesday June 23rd Makayla went in for her normal biopsy procedure. Everything went well and after recovering went home to relax. However, there were complications and Makayla was rushed back to the hospital where she passed away. Though it may hurt now, Makayla wouldn't want us to dwell in the pain because we will see her again one day. Our bright stars' life might have been extinguished, yet her light will always shine on to encourage us to push harder. Kay-Kay is survived by her Parents; Christian and Stephanie Gray; brothers, Michael Gray and Malachi Gray; her grandparents, Wesley Gray (Grandfather) and Alfie Gray (Grandmother) aka Papa and Mimi, Geri Washington (Grandmother) aka Nana-Nut, Jerome Janét Sr (Grandfather) and Jacqueline Janét (Grandmother) aka Salt and Pepper and Nainai. Aunts, Uncles, and Cosuins (by family) -Jermaine Bingham (Uncle) and Araba Bingham (Aunt/aka. Auntie Weo), Kevin Griffin, Sydney Bingham, Joshua Bingham (cousins); Petrina Holloway (Aunt/ aka Auntie Trina), Taishuan Hollaway (cousin); Judge Bailey (Uncle) and Arrica Bailey (Aunt), JJ Bailey, Harmony Bailey, Arek Bailey, Matthew Bailey (cousins); Wesley Gray Jr (Uncle)., and Shannon Gray (Aunt), Charity Gray, Elijah Gray, Hope Gray, Enoch Gray, Grace Gray, Ethan Gray and one on the way Gray (cousins), Jerome Janét Jr., (Uncle/aka. Uncle JJ) and Tabitha Janét (Aunt), Albany Janét and Acacia Janét (cousins) Aaron Gray (Uncle/aka Uncle Ronnie) and Spring Gray (Aunt), Titus Gray (cousin) Michael Kwan (Uncle) and Justine Kwan (Aunt) and host of Great Uncles, Great Aunts and 2nd cousins. Visitation will be 4-6 pm, Wednesday, July 1, 2020 at Floral Haven Funeral Home. Celebration of Life Funeral Service will be 10 am, Thursday, July 2, 2020 at St. Andrew Baptist Church in Tulsa

Makayla Jocelyn Gray was born on March 6, 2008 to Stephanie Myesha Danielle Gray and Christian James Gray. Makayla had a rough start in life as she was born pre-mature and spent her first days of life in the Newborn Intensive Care Unit... View Obituary & Service Information

The family of Makayla Jocelyn Gray created this Life Tributes page to make it easy to share your memories.

Makayla Jocelyn Gray was born on March 6, 2008 to Stephanie Myesha...

Send flowers to the Gray family.