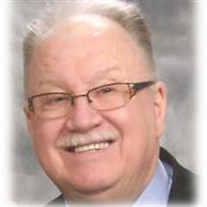 In Forest City, IA on 22 April 1941, at twelve hours old a son was adopted by James and Amie Hauge, he was their only child. Marcus at 79 years fell asleep in death in the early morning, Saturday 7 November 2020 in Tulsa, OK. In 1959 he graduated from North High, Des Moines, IA. His senior year he met and started dating his high school sweetheart, Sharon Conrad, who later became his bride, 30 December 1961. After graduation he attended the University of Iowa in Iowa City, Iowa. His first child was born there. His second child was born a few years later in North Hollywood, CA. He loved playing the trombone and was musically gifted. He also enjoyed golfing and was a member of the North High Swim Team. He started collecting vinyl records in 8th grade and continued until recently. He was a voracious reader. He retired from the Broken Arrow, OK postal service in 2006. He was preceded in death by his father and mother, James and Amie Hauge. His grandson Brent Rosdahl. He is survived by his wife of almost 59 years, Sharon. Children, Mardeaux Lea Zimmerman (Richard), Lake Stevens, WA and Marcus L Hauge II, (Lori) Broken Arrow, OK. Grandchildren, Keaton Zimmerman, WA and Alexander Hauge, OK. He was known for having a friendly smile and kind words for everyone. He was an active member in the Congregation of Jehovah’s Witnesses. In later years he dealt with various health issues, but continued faithful to the end. His witty sense of humor will be missed. He leaves behind wonderful memories for family and friends. The family appreciates and thanks all for the love and support shown to them during this time. A special thanks to the team at Davita. Arrangements entrusted to Floral Haven. Family and friends may view the obituary and send condolences to the family online, www.floralhaven.com. A memorial will be held for family and friends on ZOOM, Saturday, November 21, 2020 at 2:00 p.m.. The family will be sending out an invitation in the coming days.

In Forest City, IA on 22 April 1941, at twelve hours old a son was adopted by James and Amie Hauge, he was their only child. Marcus at 79 years fell asleep in death in the early morning, Saturday 7 November 2020 in Tulsa, OK. In... View Obituary & Service Information

The family of Marcus Hauge created this Life Tributes page to make it easy to share your memories.

Send flowers to the Hauge family.