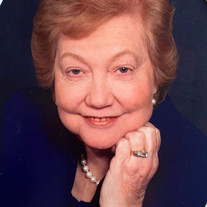 Margaret Ann Hull, 85, was born on May 30, 1935 in Windsor Locks, Connecticut and passed on December 27, 2020 in Oklahoma. She was born to John McLeod from Scotland and Mary Ann McLeod (McCarroll) whose family immigrated from Ireland. Margaret was the baby of 3 children 2 Siblings Oldest John Daniel McLeod (deceased) Mary Jane McLeod (deceased). Margaret attended school in Windsor Locks CN while working in the Tobacco Sheds hanging Tobacco leaves to dry. After graduating from Windsor Locks High School, Margaret worked at Hartford Insurance. She lived in Maryland, Colorado, Oklahoma Margaret worked at The University of Tulsa as Earth Science /Geological Science department as Department head secretary She was active in many groups and organizations- United Methodist Women’s Group (Circle), Rainbow for Girls with her daughters, was a Bethel Guardian for several years, and was active with in DeMolay with her son. Margaret later Joined Oklahoma Eastern Star where she held may local and state Offices. She also served at the General Grand Level as Grand Representative to Scotland. Margaret received many awards and Honors during her time serving with all of these organizations In early 2000’s she was serving on General Grand Level of Eastern Star and met a fellow Committee member, Donald Hull of Torrance, California Donald Hull retired from LA County Sheriffs department in 1988. Don Hull has 5 Daughters- Connie Hull of CA (Deceased), Dorothy (Mark) Hurley of WA, Donna (Don) Davis of CO, Kathy (Kelly) Sturlaugson of MN, and Karen Hull of TX; six grand children Brenda, Steven, Christy, Stacy, Jacob, and Torry; and three great grand children. Both being widowed and traveling in the same circle of friends and activities, they became smitten with each other and God took it from there They were married in 2004 In Las Vegas NV in the Little White Chapel on January 23, 2004. They stayed at the Bellagio Hotel with a grand view of the Fountain, and after a few days they traveled to Laughlin NV for an Eastern Star Activity. This was just the start of many trips and events they shared over 16 years. A few years after they were married Margaret retired from The University of Tulsa after 32 years. They lived part of the year in each place Broken Arrow OK and Torrance CA which was determined based on weather and trip schedules They have traveled to England, Scotland and Ireland on a 3 week adventure, cruised several times to Alaska, Hawaiian Islands, Bahamas and Mexican Riviera; took road trips To The North east Coast and South east coast, and road trips in California to Palm Springs to see Don’s sister Barbara Hull. Settling down some they have resided in Broken Arrow OK now for several years and have just enjoyed time to relax and spend time together Margaret is survived by her three Children- Debora Andrews ( Jim) Beattie of OK, Donna Andrews Champion of OK, and Daniel (Kanella) Andrews of OK; Grand children Richard James of OK, Russell James of OK, Julie Randell of OK, Amanda Parrish OK, Melissa Cox of FL, Heather(Patrick), Lukas Turner of OK, Mathew Andrews of OK, Christina Champion of OK, Dakota Lewis of OK, Nikol Andrews of SD, and Chantal Lewis of OK; and nine great grand children Justice, Christopher, Andrew, Liberty, Quinten, Madeline, Samantha, Gavin, Isabell, Tyler, Ruthy, Lukas, Marious, Maverick, and Layla. Visitation will be held on Sunday, January 3, from 1 pm - 5 pm at Floral Haven Funeral Home. Services will take place at 3 pm on Monday, January 4, at the Floral Haven Chapel. For those unable to attend, please follow the link for webcasting services: View Funeral Webcast

Margaret Ann Hull, 85, was born on May 30, 1935 in Windsor Locks, Connecticut and passed on December 27, 2020 in Oklahoma. She was born to John McLeod from Scotland and Mary Ann McLeod (McCarroll) whose family immigrated from Ireland. Margaret... View Obituary & Service Information

The family of Margaret Hull created this Life Tributes page to make it easy to share your memories.

Send flowers to the Hull family.