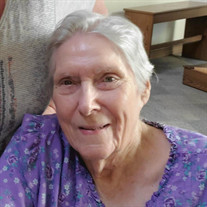 Margaret Avis McKisick 92, of Tulsa, passed away October 5, 2021. She was born December 12, 1928, in Kremlin, Oklahoma to Reverend Roy E. Trent and Avis Fetrow. She was the 7th child and was always told that she was “daddy’s favorite”, she always commented that she lived within the 200-mile radius of where she was born. With her father being a preacher (that’s what they were called in those days). Margaret went to many different schools, before graduating from Big Cabin High School in 1947. Margaret married Clark D. McKisick on August 24, 1947, and shortly afterward they moved to Tulsa, Oklahoma, and lived there the rest of their married life. Margaret is preceded in death by her parents, as well as stepmother Dolly Williamson, 3 brothers; Lee, Warren, and Paul Trent, 3 Sisters; Ruth McCarley, Sybil Webb, Mary Jane “Janie” Littell,. Margaret is survived by brother Tommy Trent and wife Kathy of Pryor, Oklahoma; Daughter Linda Terwort of Claremore, Oklahoma; Son Douglas McKisick and wife Debbie of Tulsa, Oklahoma. Granddaughters Davalyn Terwort and Keith Sparks of Claremore, Oklahoma, and Runay Hollis of Frisco, Texas. Great Grand Children Laryn Dejarnett of Claremore, Oklahoma, and Hayden Hendrix of Frisco, Texas. Many nieces, nephews, cousins, and friends. In Tulsa, they joined The Harvard Avenue Evangelical United Brethern Church. There, Margaret was Sunday Superintendent for the kindergarten classes and a chairwoman for the Women’s Missionary circle. Later they joined Hale Heights United Methodist, where she and Clark were the youth directors for several years. Margaret worked as a substitute rural mail carrier, as well as a beauty salon receptionist, before retiring from Smithkline Laboratory after 20 years. In their retirement years, she and Clark attended his annual Army Reunion for The 12th Armored Division, which was known as the “Hellcats”, where the wives enjoyed listening to the men tell their war stories. They were able to travel to many states due to it being held in different cities each year. They also made regular, “adult only” trips with her brothers and sisters to Laughlin, Nevada where “the kids weren’t allowed”. In 2008 Margaret and Linda took “The Trip”, driving over 5,000 miles, to first visit sister Ruth in California and then to see brother Paul in Oregon, making several sightseeing stops along the way, like seeing the Golden Gate Bridge and traveling up the pacific coast highway 101, into Oregon. This would be the last time she would see her sister and brother. Margaret enjoyed having family dinners at her house. She also enjoyed getting together with Clark’s family, whether it be for spur of the moment Sunday or the annual Cousin’s Dinners. A visitation will be held Sunday, October 17, 2021, at Floral Haven from noon until 4 pm and the family will receive friends 1:00 – 2:00 pm Sunday. A funeral service will be held on Monday, October 18, 2021, at 10:00 am at Will Rogers United Methodist Church in Tulsa, Oklahoma, with private family interment afterward.

The family of Margaret McKisick created this Life Tributes page to make it easy to share your memories.

Send flowers to the McKisick family.