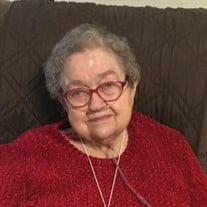 Marian June Cook passed away quietly in Tulsa, Oklahoma on June 9, just a few days before her 93rd birthday. For the majority of her life she lived in and near Vermont, Illinois. After her husband Raymond passed away in 1983 she moved to Dayton, Ohio to be near her son, Jerry, and his family. After Jerry moved his family to California she remained in Dayton with her youngest son, Robert. Eventually, she relocated to Tulsa to be near her daughter Catherine and her family due to health problems. In Tulsa she enjoyed living in her own apartment and visiting with her grandchildren. She is survived by her seven children—Judy, Jerry, Catherine, Carol, Edwin, Susan, and Robert. Her fourteen grandchildren--Sarah, Brian, Kevin, Jared, Carolyn, Jennifer, Joe, Dale, Ronnie, Raymond, Joshua, Aaron, Kristina and Robbie were the delight of her life and now she will again see Kristina and Kevin, who passed on before her. Even greater blessings came to her with the births of her six great-grandchildren Jonathan, Joshua, Amy, Dustin, Elijah and Harper. For years she was a busy homemaker. She presided over a boisterous, noisy household filled with children, musical instruments, and pets. To find some quiet time, she took evening walks on the farm, which she thoroughly enjoyed. She liked gardening and canning, and was always pleased with filling the basement with one hundred quarts of green beans and tomatoes. In addition to all that she had a flower garden near the road. Somehow, she managed to convince the children that weeding the flowers was a reward for weeding the rest of the garden. On her trusty sewing machine she sewed and mended, making clothes for her daughters and teaching them to sew. In her later years she made clothes and toys for her grandchildren and started quilting. We remember her as a dear mother, grandmother, and great-grandmother, and as a great cook. Each of us had a favorite of her dishes. Her recipes have been shared through the family to the grandchildren so she will always be remembered in the kitchen. Her favorite bible verse was Psalm 19:14 – “Let the words of my mouth, and the meditation of my heart, be acceptable in thy sight, O LORD, my strength, and my redeemer.” Graveside services will be held at 10:30 a.m. on Saturday, June 19, 2021 at Vermont Cemetery in Vermont, Illinois.

Marian June Cook passed away quietly in Tulsa, Oklahoma on June 9, just a few days before her 93rd birthday. For the majority of her life she lived in and near Vermont, Illinois. After her husband Raymond passed away in 1983 she moved to Dayton,... View Obituary & Service Information

The family of Marian June Cook created this Life Tributes page to make it easy to share your memories.