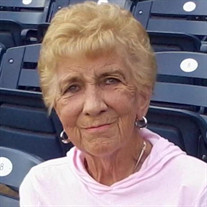 Marie Louise Igrisan, 79, of Broken Arrow, Oklahoma passed away on July 20, 2021. She was born on March 20, 1942, to parents Mack and Stella Semenuk. She married the love of her life, Daniel Igrisan, on May 14, 1976, and spent her life doing everything from working together to traveling together. Always an avid quilter with a love for all things fabric, she spent a good portion of her life as a member of the American Quilter’s Society. In 1989 she got to go to the American Quilters Society convention for the first time. When Daniel happened to get a call for work that was taking him down beside the convention. When Marie found out she quickly told him she was coming and taking off work. She continued attending the convention until 2014. She spent a lot of time as a waitress, and not just any waitress, but one of the best. She was able to handle large parties of 40-50 people easily on her own and was the lead on even bigger parties into the hundreds. As she got older she spent time working with charities like the ASPCA, and Toys for Tots which she would gather toys throughout the year to donate to. Even into her older age, she liked to keep busy. She has been described as always going somewhere, every day! She loved to travel and had visited 40 states, including Hawaii, and several countries including France, Mexico, and Germany! Marie was everyone’s friend, and everyone liked her! She was a talkative person and enjoyed being around people. It wasn’t just people she liked being around though, having taken to adopting dogs from rescues and people that could no longer care for them. She lived an extremely full life and will be missed by so many. She is survived by her husband Daniel Igrisan; her children Christina Rossier, and Diana Sallee and husband Jay; grandchildren Cory Hassler, Justen Timmerman, Jordan Dombrowski, Christina Rossier, Mark Perrone, and Jayson Sallee; great-grandson Austen Timmerman; siblings Gloria Semenuk, and Janice Hija and husband Stephen; along with a host of other family and friends. She is reunited with her parents Mack and Stella Semenuk; and grandson Tyler McCrackin.

The family of Marie Louise Igrisan created this Life Tributes page to make it easy to share your memories.

Send flowers to the Igrisan family.