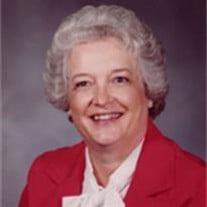 â??For I know the plans I have for you,” declares the LORD, “plans to prosper you and not to harm you, plans to give you hope and a future.â? Â Jeremiah 29:11 Marilu Lewis Evans passed away peacefully after an extended illness at home on July 7, 2012, while surrounded by family and lifted up by prayer. For the last 15 years, she lived with her daughter and son-in-law, Susan and Dennis Whitlock in Elizabeth, Colorado. Born January 24, 1930, to Viva Nadine Antry and Albert Douglas Lewis, Marilu grew up in Tulsa where she graduated from Will Rogers High School in 1948 and Hillcrest Medical Center Nursing Program as a Registered Nurse in 1951. One day a blue-eyed Kansas boy jumped a white picket fence, stole a kiss, and promised he would marry her. She politely informed him that she had plans to become a missionary and suggested he jump back over the fence and go to church. That boy was Donald Evans and he kept every promise he made to her for the rest of his life. They wed on August 18, 1951, had three beautiful daughters â?? Susan, Barbara, and Janet â?? and devoted their lives to mission work both abroad in Nicaragua with the Central American Mission and back in the US with the Go Ye Mission and Markoma Bible Academy in Tahlequah, Oklahoma. They also remained very active in many ministries throughout their lives, including prison ministry and providing spiritual guidance and education to â??those whose hearts spoke Spanish.â? Mariluâ??s other calling in life was nursing. A truly gifted and compassionate nurse, she worked from 1971 until 1990 at Tahlequah City Hospital and Go Ye Village Nursing Home and is listed in the Whoâ??s Who of American Nursing. Marilu will be remembered most for her brilliant laugh, unfailing generosity, gentle spirit, devoted prayer life, and beautiful art. She was Â welcomed home to Heaven by the love of her life Â Don Evans. Â Also greeting her were her second husband and companion, Eric Ryser and many other friends and family. Â She will be missed here on Earth by her sister Donna Lewis, her daughters Susan Evans Whitlock (Dennis), Barbara Evans, and Janet Evans Harris (Mark); her grandchildren Tristan and Jacob Whitlock, Ashley Evans Mattocks (Ron) and Lindsay Evans Black (Taylor), Briana and Luke Irvin; as well as her seven great-grandchildren, many cousins, nieces, nephews, and Â friends. Â Memorial Celebration Service at 12:30, Saturday, July 14, 2012, with Reception to follow. Floral Haven, 6500 S. 129th E. Ave. Broken Arrow, OK 74012. Â  In lieu of flowers, donations can be made to Camino Global for the Instituto Biblico Nicaraguense Ethridge-Evans. “Memory of Marilu Evans Ryser” for account #063700 in care of CAM/Camino Global 8625 La Prada Drive Dallas, TX 75228

â??For I know the plans I have for you,&#8221; declares the LORD, &#8220;plans to prosper you and not to harm you, plans to give you hope and a future.â? Â Jeremiah 29:11 Marilu Lewis Evans passed away peacefully after an extended illness at... View Obituary & Service Information

The family of Marilu Evans created this Life Tributes page to make it easy to share your memories.