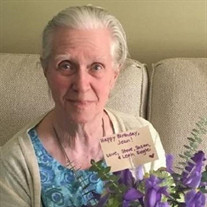 Marjorie (Jean) Engle, 93, of Broken Arrow, OK passed on January 13, 2021 at her home, Prairie House Assisted Living in Broken Arrow. She was born on January 8, 1928 in Horton, KS to Lewis and Dorothy Moore (nee Hedrick). She was the second of eight children. She was a longtime member of the Episcopal Church and held various roles in the Church. After she retired, she volunteered for Red Cross in Tulsa. She enjoyed genealogy and crafting especially crochet and ceramics. She was a great Bingo player at the Sun Oil Rec. Club’s bingo nights and loved entertaining her grand kids at their home of many years west of Sperry. She retired from Sun Oil Refinery in Tulsa after many years as the parts manager in the garage. Jean was preceded in death by her husband of 66 years, Keith Leon, who was the love of her life; parents; two brothers, Elmer and Walter; and two sisters, Virginia (Paana) and Florence. She is survived by daughter and son-in-law, Karen and Claude Newport of Illinois; son and daughter-in-law, Stephen and Susan Engle of Broken Arrow; grandson, Jesse Newport of Tennessee; grandson and wife, Kirby and Regina Newport of Missouri; grand daughter and husband, Leah and Cody Bales of Texas; one great-grandson, Henry Newport and one step great-grand daughter, Alana of Missouri. She is also survived by her sisters, Armeda Weaver of Tulsa and Mary (Lawrence) Erwin of Tulsa; one brother, Wilbur (Doylene) Moore of Bixby; numerous nieces and nephews. Funeral services will be graveside with only family in attendance with interment to follow at Floral Haven Cemetery. The service will have a webcast available for viewing through Floral Haven.The webcast will begin at 3:15PM on Monday, January 18, 2021. The link for the webcast is: https://viewneral.zoom.us/j/94704169437?pwd=YjJkSGN0cjI0bVpwQnUrKzR5dXIxUT09 In lieu of flowers, donations may be made in her name to the Alzheimer’s Association.

Marjorie (Jean) Engle, 93, of Broken Arrow, OK passed on January 13, 2021 at her home, Prairie House Assisted Living in Broken Arrow. She was born on January 8, 1928 in Horton, KS to Lewis and Dorothy Moore (nee Hedrick). She was the second... View Obituary & Service Information

The family of Marjorie Jean Engle created this Life Tributes page to make it easy to share your memories.

Send flowers to the Engle family.