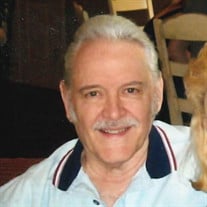 Our loving husband, father, son, brother, grandfather, and great-grandfather passed away peacefully in the hospital with loving family by his side on Thursday, August 13th, 2020, due to medical complications. Gene was born July 8, 1936 in Houston, Texas and spent his early childhood in Texas until he moved to Tulsa, Oklahoma with his loving parents, Marquis Jesse Crose and Dovie Irene Hunt. He was the first of five children and loved his siblings very much. He attended St Josephs Military Academy as a youth and later graduated from the Oklahoma Military Academy. In 1959 Gene married Judy Jennings and the two loved and cherished their four children: Bret, Marc, Beau, and Gina. After their divorce in 1970, he met and married the love of his life, Shelley Stewart in 1989. A short time later the marriage ended but the Lord restored their marriage on July 1, 1995 and they were able to share 25 wonderful years together. An excellent musician, Gene and his band, Gene Crose and The Rockets, were one of the first bands to introduce Rock n’ Roll music to Oklahoma. His vast musical talents led him to play throughout the state with music legends such as JJ Cale and Leon Russell and earned him the nickname “The Godfather of Rock n’ Roll.” Gene was so grateful to be a part of the original Tulsa Sound. In 1988 he starred as Eddie in the summer musical, “Eddie and the Ecclectics” at the Brady Theater which was one of the highlights of his life. Gene’s love for his Savior came through music. After becoming a Christian he gave his life to the Lord and found great pleasure in ministering through music, singing in churches, assisted living homes, and nursing homes. During his lifetime Gene enjoyed playing baseball, billiards and snooker and won many trophies and ribbons over the years. He loved his friends at the Broken Arrow Senior Center and delighted in playing billiards and snooker with them. One of his favorite pastimes was cooking and he always took great pleasure in making his sweet potato casserole and peanut butter chewies for his family and friends. Gene adored his beautiful dogs, Little Queenie, Rose and the late Champ and Tigger and found great pleasure having them by his side. In the last few years of his life Gene was fortunate to find a wonderful and loving caregiver, Lizzy Hughey who took great care of him and brought much happiness to his life. He especially loved her blueberry pancakes and visits with her dog Koa. Gene is survived by his loving wife, Shelley; four children, Bret Crose, Lehi, UT; Marc (Tawni) Crose, Paso Robles, CA; Beau (Karla) Crose, Provo, UT; and Gina Presson, Portland, OR; two siblings, Billy Ray (Peggy) Crose, Oologah, OK; Gwen Gross, Texico, IL; His first wife, Judy Jennings (Stan) Seawright, Ventura, CA; and his eleven grandchildren and six great-grandchildren; He was preceded in death by his parents, Marquis and Dovie Crose; two sisters, Kathy Hunt and Pam Owens, and one granddaughter, Kyrah Crose. We’ll miss you “Elvis!” Your family, friends and all your musicians will never forget you! A viewing will be held for friends and family from 8 a.m. to 7 p.m. on Tuesday, August 18th and Wednesday, August 19th at Floral Haven Funeral Home in Broken Arrow located at 6500 S 129th E Ave. Funeral services will be private. The family would like to extend a special thanks to the surgeons, the wonderful nursing care at Saint Francis Hospital, and the hospice personnel for your great care and kindness.

Our loving husband, father, son, brother, grandfather, and great-grandfather passed away peacefully in the hospital with loving family by his side on Thursday, August 13th, 2020, due to medical complications. Gene was born July 8, 1936 in... View Obituary & Service Information

The family of Gene Crose created this Life Tributes page to make it easy to share your memories.

Send flowers to the Crose family.