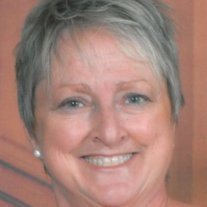 Marsha Louise Howe The wife of her high school sweetheart Dean Howe, departed this world and entered the promised land on July 14, 2013 after complications from surgery. Marsha, the daughter of the late Dale and Louise Cochrane, was born on November 3, 1950 in Shawnee, OK. She was a member of the Church of Christ. She attended Dale High School and the University of Oklahoma. Marsha and Dean were married in 1970, while they were students at OU. You could not find two people more in love. After college, Marsha moved her little family from Indiana to Puerto Rico and then to North Carolina as Dean was reassigned by the Army. Marsha was a distinguished civilian employee of the US Army Corps of Engineers, Tulsa District for 30 years, retiring in 2011. Her responsibilities included providing support for all four branches of the Department of Defense, Army, Navy, Air Force and Marines. She received many awards and commendations for her work throughout her career. Marsha loved all sports and the adventure of traveling and meeting new friends. She enjoyed a good laugh and liked to turn new friends into best friends. Most of all she loved children. She loved her children and grandchildren with all her heart. And they adored their Mom and Grammy. She was an active volunteer for Girl Scouts and Cub Scouts. She had a magical way with babies. When she took them in her arms, they would immediately become calm and contented as if they were in the safest and most loving place in the world. And they were. She was a few weeks away from beginning her second career as a â??huggerâ? at the Margaret Hudson School in Broken Arrow. Her duties were to care for the newborn babies in the school nursery as the young mothers take high school classes. The world is a better place because of Marsha. Her love for her family and their love for her were immeasurable. We may never find a better person than her. She is survived by her loving husband of 43 years and best friend Dean Howe of the home in Broken Arrow, OK; her daughter Amy Howe of Tulsa, OK: son Matt Howe of Broken Arrow, OK; son Sean Howe of Broken Arrow, OK; Grandchildren Kyler Howe, Devin Lisk, and Michael Lisk of Broken Arrow, OK; daughter-in-law, Rachel Harshman of Broken Arrow, OK; sister and brother-in-law Carol and David Ingram of Choctaw, OK; brother and sister-in law Ronald and Laurel Cochrane of McLoud, OK; sister-in-law Jan Wooldridge; brother-in-law and sister-in-law Tim and Janie Howe of McLoud, OK; brother-in-law and sister-in-law Gary and Kathy Howe of Choctaw, OK; and many aunts, uncles, cousins, nephews and nieces. In lieu of flowers, please send a contribution to the Margaret Hudson School, Broken Arrow.Memorial services: Tulsa â?? Floral Haven Chapel, Friday, July 19th, 12:30pm Dale â?? Dale Church of Christ, Thursday, July 18th, 10:30am

Marsha Louise Howe The wife of her high school sweetheart Dean Howe, departed this world and entered the promised land on July 14, 2013 after complications from surgery. Marsha, the daughter of the late Dale and Louise Cochrane, was born on... View Obituary & Service Information

The family of Marsha Louise Howe created this Life Tributes page to make it easy to share your memories.