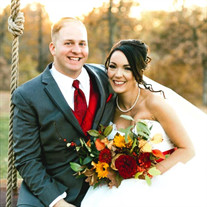 Technical Sergeant Marshal (Moo) Dakota Roberts, 28 of Claremore, Oklahoma died in combat on Wednesday, March 11, 2020 while deployed in support of Operation Inherent Resolve in Iraq. He was born January 29, 1992, in Tulsa, Oklahoma. Marshal’s parents, Sally Borrell and Randy Roberts, raised Marshal in the community of Owasso, Oklahoma. Marshal graduated from Owasso High School in 2010. Marshal is survived by his wife, Kristie Kay Roberts of Claremore, Oklahoma, his daughter Paityn Roberts, his mother and stepfather, Sally and Mike Borrell, his father and stepmother, Randy and Carol Roberts, his sisters Cortney and Karla, his step-siblings Bailey, Jami, Jimmy, Halsie, Samantha, and Mathew, his grandparents Homer and Sunni Wager and Harold Roberts, and numerous aunts, uncles, and cousins. His in-laws include Theresa and Noah Hidalgo, Uncle Ron and Aunt LuAnne, sister’s in-law Kellie, Megan, and Allyssa, and brother in-law Joshua. He was preceded in death by grandparent Faye Roberts, and great-grandparents Mike (Bomps) and Ruth. Marshal joined the Oklahoma Air National Guard in 2014. Marshal’s military career began as a Civil Engineer Operations Manager. Later, Marshal accepted an opportunity to be a Command Support Staff member for the 219th Engineering Installation Squadron. He was proud to serve in the Air Force, and the members of the 138th Fighter Wing and 219th are all better for having the privilege of serving with him. The United States Air Force has set out definitions of courage and spirit that all Airmen should aspire to achieve in their daily life. Courage is defined as the mental or moral strength to venture, persevere, and withstand danger, fear, or difficulty. Spirit is defined as an intense energy that empowers one to act when called to action. Marshal Roberts embodied these definitions – he placed God and others before himself always, even up until his last breath on this earth. Marshal will always be remembered for the love and sacrifice that he made on behalf of his country and fellow wingmen.

The family of Marshal Dakota Roberts created this Life Tributes page to make it easy to share your memories.

Send flowers to the Roberts family.