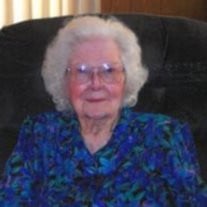 Martha Louise Forehand Smith – ObituaryFuneral Service: March 13, 2013Martha Louise Forehand Smith was born on January 16, 1919 in Blackwell, Oklahoma. Martha was the youngest of six brothers and sisters born to George Washington Forehand, Jr. and Ruth Hughes Forehand. Her mother died within a few weeks from complications of the birth. Martha was raised by her father and her three, sisters. Even without her mother, Martha grew up to be an excellent wife and mother.Martha was preceded in death by her parents, her two brothers (Martin and Kenneth), their wives, her three sisters (Evelyn, Mildred, and Edna), their husbands, three nephews, and one niece. She is survived by her husband Lee O. Smith, daughter Joy Smith, daughter Mary Keck and son-in-law Brent Keck, three grandsons, Garrett, Davis, and Brandon Keck and their wives, Mackenzie, Courtney, and Lauren. She is survived by 15 nephews and nieces, 28 great-nephews and nieces and many more great-great-nephews and nieces.Martha was able to complete school through the 8th grade. Her family needed her to work, so work she did. She took on jobs as a housekeeper, field worker, at a dry cleaners, and other odd jobs.In September 28, 1945 Martha married Lee Smith after a short engagement. Twelve years later, Mary was born, followed by Joy two years later. Lee and Martha were married for 67 and one-half years.Martha worked at Kerr Elementary for most of her adult life as the pastry cook. Kerr Elementary was across the street from her home. Martha was known for her cooking, especially her peanut brittle and cinnamon rolls.Martha and Lee attended North Sheridan Church of Christ. They were founding members of the East Tulsa Church of Christ later called Garnett Road. Later they attended Memorial Drive and for the past 22 years they have faithfully attended the 29th and Yale Church of Christ. Martha taught children’s Bible classes for many years and encouraged her daughters to teach.After retiring, Martha and Lee traveled the states and enjoyed their grandchildren and many friends.

The family of Martha Louise Smith created this Life Tributes page to make it easy to share your memories.