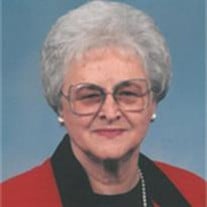 Martha E. Taylor Blackmore went to her eternal home on February 18, 2012. Born in Mitchell, Indiana to LaVerne and Martha Taylor on August 30, 1921. She graduated from Springfield, Illinois High School in 1939. Martha grew up a â??P.K.Kidâ? as her father ministered many years in Springfield, Illinois. Graduated from the Cincinnati Bible Seminary in 1943. Martha studied vocal music for four years at Cincinnati Conservatory of Music. She married Roy C. Blackmore in 1943 and served with her husband in a ministry in Louisville, Kentucky. They were a singing and preaching revival team for three years conducting local church revivals in ten states. They ministered, 1951 â?? 1961, to First Christian Church in Flora, Illinois; and twenty five years 1961 â?? 1985 to East Tulsa Christian Church, Tulsa, Oklahoma. She and her husband ministered in over twenty interim ministries in Florida, Illinois, and Oklahoma. Martha was a gospel vocalist in many revivals. During her local ministry, she was a soloist, choir member, teacher of young adults, directed vacation Bible schools and drama for High School youth, a speaker for the North American Christian Convention, when it was held in Tulsa. She belonged to the Daughters of the American Revolution. Martha was the mother of three sons: Philip (Cathy), Timothy (Cheryl) and Mark (Annie). She is survived by her husband Roy, sons, and several grandchildren and one step grandson, and 1 great granddaughter and 2 great step grandsons. Â  A celebration service for the life of Martha will be held on Wednesday, February 22, 2012, 10:00 am in the Floral Haven Funeral Home Chapel, Broken Arrow, Oklahoma. A graveside service will follow at Memorial Park Cemetery in Tulsa, Oklahoma. Â  Visitation will be held on Tuesday, February 21, 2012 at the Floral Haven Funeral Home from 12:00 pm to 9:00 pm with the family receiving friends from 5:00 to 7:00 pm that evening.

Martha E. Taylor Blackmore went to her eternal home on February 18, 2012. Born in Mitchell, Indiana to LaVerne and Martha Taylor on August 30, 1921. She graduated from Springfield, Illinois High School in 1939. Martha grew up a â??P.K.Kidâ?... View Obituary & Service Information

The family of Martha E. Taylor Blackmore created this Life Tributes page to make it easy to share your memories.