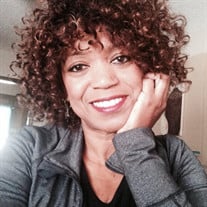 Marthal Yvonne Hall-Jackson, 62, of Tulsa, OK transitioned this life on June 3, 2021. Marthal was born on February 13, 1959 in Detroit, MI to Allan Attabury Hall and Martha Ann Cohn-Hall. She was preceded in death by her parents, Allan and... View Obituary & Service Information

The family of Marthal Jackson created this Life Tributes page to make it easy to share your memories.

Send flowers to the Jackson family.