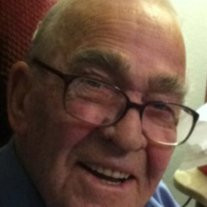 Rev. Marvin Kenneth Mann, 84 years, 9 months and 25 days passed from this life on Sunday, July 14, 2013 in Tulsa, OK.He was born on September 19, 1928 to Rev. L.W. Mann & Lula Bell Mann in Briartown, OK. He married Thelma Faye Medlock on July 24, 1950 with just 10 days short of celebrating their 63rd wedding anniversary; their example of true, unselfish love is a model to be followed. His life was service to his Lord and Savior Jesus Christ, to love on his family and serve with his church family. He enjoyed golf and raising cattle.He is survived by his spouse of the home, three daughters: Carol Reeder of Tulsa, Connie Burton and husband John of Broken Arrow, Sheila Bennett and husband Mike of Broken Arrow and one son David Mann and wife Sandra of Goldsboro, NC. Eight grandchildren: Brian Burton of Keller, TX, Noah Bennett of Tulsa, Angie Burton Goyer and husband Kyle of Dallas, TX, Lindsey Bennett Borror and husband Jeremy of Broken Arrow, Amber Mann Winders and husband Robert of Goldsboro, NC, Allison Reeder Sheffield and husband J.J. of Bixby, Rev. Daniel Mann and wife Melissa of Skokie, IL and Jacci Reeder of Ft. Worth, TX. Seven great grandchildren: Mindi Cartwright, Kaylee Borror, Abigail Borror, Carlie Mann, Colby Mann, Ayden Winders and Piper Borror. He is survived by one sister Maybelle Stacy and a host of family and friends.He was preceded in death by his parents, Rev. LW & Lula Belle Mann, six brothers: Virgil Mitchell, Olen Mann, Roy Mann, Wesley Mann, George Mann and William â??Billâ? Mann and three sisters: Syliva Hampton, Goldie Hayes and Dorothy Gibbs.He honorably served our nation in the United States Army and was proud to be a veteran. Along with his brother Bill, he started Ace Fence Company in November 1953 in which he operated until his retirement in 1990. Although his partnership in the fence business ended in the 50â??s, his relationship with his brother Bill was a lifelong partnership, they truly loved each other and are now re-untied. They planted churches and denominational associations together and in the early days preached revivals together. They labored together. He was ordained as a Preacher of the Gospel on September 11, 1960 in Broken Arrow, OK. The fruit from the churches planted and many souls led to Christ will only be fully known in Heaven. After years of pastorate, he cherished being the moderator of the Arkansas Valley Association of Free Will Baptist as well as serving in the General Board of the Oklahoma Association of Free Will Baptist, positions he currently held. He preached his last sermon one week before his home-going. He faithfully passed his faith along to his children and grandchildren as he was thrilled to see his grandsons continue his passion of church-planting in Texas & Illinois.The family will receive guests Tuesday evening, July 16th at Floral Haven in Broken Arrow. A celebration of life will be held on Wednesday, July 17th at 10:00am at Liberty Free Will Baptist Church, 1100 N. 5th in Broken Arrow with Rev. Joey Griffith and Rev. Daniel Mann officiating. A graveside service will be held that afternoon at 3:00pm in Checotah, OK just south of Checotah on Old Hwy 69 for the family and many friends in Checotah and Eufaula communities. In lieu of flowers, please send donations to the Arkansas Valley Association, P.O. Box 3, Oakhurst, OK 74050.

The family of Rev. Marvin K Mann created this Life Tributes page to make it easy to share your memories.