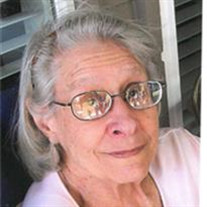 Mary Jean McKim was born Dec. 7, 1932 in a small Iowa farming community on a date that would later become infamous to history. One of Maryâ??s early memories was being at a birthday party and hearing the announcement of the attack on Pearl Harbor over the radio. Later, she could remember seeing POWâ??s from the war in Europe working farmland in her native Iowa as the war went on. She grew up in a time when telephones and electricity were not in every home in her rural Iowa, something unimaginable to her children. Mary recalled later that she did not even have indoor plumbing until she was attending Algona High School, where she eventually graduated. She had an older brother, David, who had gone before her and joined the Navy soon after graduating. Her younger sisters Evelyn and Grace would follow her at Algona High, and all four children would eventually leave Iowa on their own life paths. David would serve in the Navy until his retirement. Evelyn became a nurse, and Grace an educator. Mary Jean left Iowa for a job with Braniff Airlines, where she worked as a reservation and ticket agent in Rockford, Illinois, eventually transferring to Tulsa, Oklahoma. There she would meet her husband Walter David Carroll, to whom she was married in 1956, and remained his wife for 52 years until his passing in 2008. Walter, or David as he was usually called, and Mary had four children of their own. Sondra Jean was born first, followed by Timothy David, Stephen Richard, and John William Carroll. The family lived in Tulsa as the children grew, where David worked as a draftsman, and Mary assumed the role she was most happy and complete in, being keeper of the family. Mary followed her childrenâ??s lives through the years, always knowing what concerned them, where the important things were for their needs, being sure they were taken care of before she would rest or indulge herself in her own activities. She enjoyed staying up to date with her friends and family old and new, always on the phone or writing letters to someone about something. She was active in United Methodist Women, attending functions and meetings right up until her passing on July 5th, 2012. Mary Jean McKim Carroll was an ordinary sort of woman. She had no particular strengths, nor gifts, nor abilities that set her apart. She did not climb mountains. She did not travel to far away exotic lands, did not achieve fame, nor rise high in the professional world. The details of her life are rather unremarkable to those outside of her family. And in being all of these mundane, daily things, she achieved something that might be called remarkable and extraordinary. She was a Mom. To her husband and children, she was a presence throughout their lives that endured the years. As far away or as close as we needed her, never failing to be there no matter her own concerns or needs. The ache in our hearts is large at her passing.

Mary Jean McKim was born Dec. 7, 1932 in a small Iowa farming community on a date that would later become infamous to history. One of Maryâ??s early memories was being at a birthday party and hearing the announcement of the attack on Pearl Harbor... View Obituary & Service Information

The family of Mary Jean Carroll created this Life Tributes page to make it easy to share your memories.