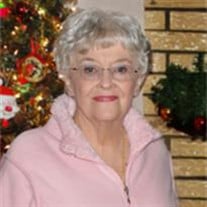 Mary Jo Donavan, age 78, of Broken Arrow, Oklahoma, went to be with her Lord and Savior on November 15, 2012, in Broken Arrow, Oklahoma and is now enjoying singing in Heaven. She was born on December 3, 1933 in Elkhart Kansas to Clarence and Wilma Warner. Mary Jo was reared in Dodge City, Kansas and was there until she moved to Havre de Grace, Maryland to be wed to Lt. Paul Donavan.Â Lt. Donavan was stationed at the Aberdeen Proving Grounds in Maryland.Â Mary Jo married Paul C. Donavan on February 5, 1954.Â They were divorced in 1980. Mary Jo is survived by her sister, Lois Shipe, and her daughter Codi Bennett.Â She is also survived by her two children; daughter Cheryl and husband Steve Holloway of Broken Arrow, and son Bruce Donavan and wife Kit of Stillwater.Â She is also survived by her three grandsons, Chad Toupin and wife Maggie, Corbin Donavan, and Connor Donavan. Â For over 30 years Mary Jo poured her life into her family, church, and the Stillwater community.Â Many of her life experiences included: 25 years of being a Weight Watchers lecturer, working as an instructor for Adventures in Attitudes and starting her own jewelry business.Â Her overwhelming passion, however, lay in her relationship with Christ and sharing His good news. Â Services will be held at 11:00 a.m., on Tuesday, November 20, 2012 at University Heights Baptist Church in Stillwater.Â Pastor John Bugg will officiate the memorial service.Â Memorials may be made to the Music Ministry at University Heights Baptist Church.

The family of Mary J. Donavan created this Life Tributes page to make it easy to share your memories.