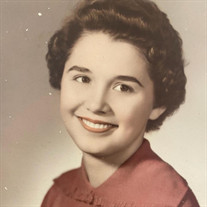 Mary Elizabeth (Rodgers) Hart, 79, died November 5, 2021, in Tulsa, Oklahoma. She was born in Gracemont, Oklahoma on January 7, 1942, to Harold and Cynthia Rodgers. Mary graduated from Gracemont High School and then attended the University of Oklahoma before returning home to work at Southwestern Bell. She met the love of her life, Gordon Hart in October 1960. They married in December 1960 and welcomed their first child, Lisa Beth in November 1961. Brian James was born in November 1963 and Lori Anne in June 1966. Mary loved her church, being a member of Mayfair Church of Christ, Stillwater Church of Christ, Park Plaza Church of Christ, Southern Hills Church of Christ and most recently The Park Church of Christ. Mary was involved in Ladies Bible Class, Sunday School and many other areas of service over the years. Gordon and Mary began married life in Anadarko, OK. They moved their young and growing family to Oklahoma City, then to Stillwater and finally settled in Tulsa in 1974, making that home until the time of their deaths. In her earlier years, she worked part-time at Oklahoma State University, cared for other families’ children and in the banking industry, but the most important job to Mary was being Mom, Meme to her grands and a homemaker. Mary was an avid seamstress and quilter. She made most of her family’s clothes when they were younger and made quilts for all family members and many cherished friends to celebrate births, marriages, graduations and special occasions. She won many ribbons at State Fairs for her sewing and quilting. Mary cherished her Tuesdays with the quilting group and Thursdays playing bridge. She treasured close friends who were family to her. Fred and Barbara Shultz and Stanley and Louise Townsend were lifelong friends she dearly loved. Mary was preceded in death by her beloved husband, Gordon; her parents, Harold and Cynthia; 2 brothers Tommy and Jimmy; Mary is survived by her sister Dorothy Elliott of Oklahoma City; her children and their spouses: Lisa and Mike Raiber of Norman, Brian and Lori Hart of Tulsa and Lori and Tracy Clark of Owasso; 9 grandchildren and 5 bonus grandchildren in their spouses/future spouses: Erin and Jason Finley, Olivia and Keegan Nees, Taylor Hart, Spencer Hart, Hunter Hart, Savannah Hart and Nick De Carlo, Steven Way, Austin and Lauren Clark, Dakota Clark and Avery Miller; 3 great grandchildren: Harper Hart, Theodore Nees and Elizabeth Finley. A service to celebrate Mary’s life will be held Tuesday, November 23 at 2:00 at The Park Church of Christ Chapel, Tulsa, Oklahoma. 10600 E. 96th Street, Tulsa, OK 74133. Mary will be laid to rest at Ft. Gibson National Cemetery, alongside her true love, Gordon. For those wishing to donate, Mary supported Sowing for Eternity, a mission of The Park Church of Christ.

The family of Mary Elizabeth Hart created this Life Tributes page to make it easy to share your memories.

Send flowers to the Hart family.