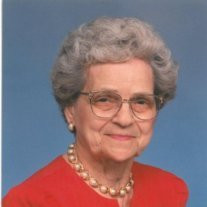 Mary Jane (Janie) Reed was born on December13, 1918 in Topeka Kansas. She was called home to be with her precious Lord, and Savior, February 14, 2013 Janie attended Tulsa Central High. She was employed by and retired from Rockwell International,... View Obituary & Service Information

The family of Mary Jane “Janie” Reed created this Life Tributes page to make it easy to share your memories.