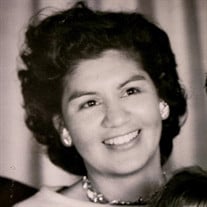 Mary Munoz, age 90, departed this world for her heavenly home on Friday, January 8, 2021 at home surrounded by her family. Mary Rose Sanchez was born on January 21, 1930 in Brawley, California to Josephine and Amado. Mary’s greatest legacy is her children. Mary was married in 1955, and in 8 years God had blessed her marriage with five beautiful children, Louis, Teresa, Elizabeth, James, and Anthony. Her children were the joys of Mary’s life, and she was able to pour her God-given qualities of nurturing and caring into raising her family. Mary dutifully kept family records, handwriting each of her children’s births, baptisms, confirmations, marriages, and the births of her grandchildren in the family bible. Mary made many beautiful memories with her children that they will never forget. The children all fondly remember the time they spent around the campfire telling scary stories during long summer vacations, tent camping at Richardson Grove State Park. They treasure the time they spent in the kitchen, with Mary leading many extended family members making tamales on Christmas Eve. Mary’s kitchen always smelled wonderful, and she was famous for her menudo, pozole, and tamales. Her children loved to come home from school and see what their mom had cooking on the stove. Each of them will hold dear the memory of seeing her take off her apron and sitting down to a homemade dinner as an entire family each night. Mary was a role model to her children, demonstrating strength and determination, love and most importantly faith. Mary kept very busy with raising her children, cooking, volunteering and many other things -- she never sat still. Mary always stayed active. She loved to do her daily exercises, from sit-ups and leg lifts, to eventually enjoying aerobics in the 1980s. She loved to be outside gardening and also camping, in many of the most beautiful parts of California, with her family. Mary was not only a fixture in her community during her time in Vallejo, but well known in her neighborhood as well, and the other children would congregate at her home -- whether it was for meals or just as a hangout spot. When they would hear Mary was making tortillas, they would show up at her doorstep with smiling faces and hungry stomachs and she would feed them. Mary served as a Cub Scout Den Mother for her son’s troop, and enjoyed all of the activities that came with scouting. Mary was always willing to open her home, and her nieces and nephews were no exception, staying for a week or several months. Mary always made them feel welcome, safe, and loved. Mary was always faithful to God. She was a faithful parishioner at Saint Basil’s Catholic Church the entire time she lived in Vallejo. Mary served in the church kitchen, using her skills as a cook to minister to the physical and spiritual needs of needy families in her community. Mary raised her children in her faith, praying with them every night, teaching them about God’s promises, providing them with a strong Catholic education, and ensuring they worshipped at mass every week. Mary found comfort in singing hymns and especially in praying the rosary, things she did faithfully every single day. After retirement from Sears, Mary continued to volunteer her time to causes she supported. She enjoyed collecting toys for children who were in the hospital. She also had the opportunity to travel all over the United States to visit her children, spending time with her precious grandchildren. She eventually moved to Broken Arrow, Okla., to spend her remaining years with her daughter Liz and son-in-law Richard. Mary enjoyed going up to the dog training facility and watching Liz and Richard train their dogs. She also enjoyed having a little canine companion of her own, her dog Bella. Those years in Oklahoma gave her the opportunity to watch her great-grandchildren grow up surrounded by the same love and faith she had shown her children. Mary had a lifelong love for music. She loved to sing her entire life, whether it was in mass, in her living room, or to herself, it was something she loved to do. Mary always had a smile on her face, and a kind word for the people she met. Even when her children were grown, she took pride in the people they had become, and she would never hesitate to tell anyone that those were her children. She lit up with joy when she saw her grandchildren and great grandchildren especially when she would get to spend time with them. Even in the last couple of years, seeing her great-grandchildren curl up in the chair next to her would make her smile. Mary’s legacy is in the love she showed to her family, and how she nurtured her children, grandchildren, and great-grandchildren. Mary will be remembered for serving her neighborhood, her community, and her customers where she worked. Finally, Mary was known as a faithful servant to God, and she has now been received by God the father in her heavenly home. Her family is in awe of her strength, her faith and her love of family. She will live in our hearts forever. Mary is preceded in death by her parents, Josephine and Amado, and son Jim. Mary is survived by her children, son Louis and wife Caren, daughter Teresa and husband Russell Green, daughter Liz and husband Richard Beezley, and son Tony and wife Cynthia. She is also survived by her ten grandchildren, Christian, Alex and Stefan Munoz, Kyle, Tyler and Chelsea Green, Ryan and Kristin Beezley, and Kaitlyn and Sophia Munoz, and seven great-grandchildren Renzi, Roman, Maria, Ryann and Riley Beezley and Mariana and Chanden Alexander. Memorial Mass will be Jan 27, 2021 at 10:30 am at St. Benedict’s Catholic Church 2200 West Ithica Street Broken Arrow, OK 74012.

Mary Munoz, age 90, departed this world for her heavenly home on Friday, January 8, 2021 at home surrounded by her family. Mary Rose Sanchez was born on January 21, 1930 in Brawley, California to Josephine and Amado. Mary&#8217;s greatest... View Obituary & Service Information

The family of Mary Munoz created this Life Tributes page to make it easy to share your memories.

Mary Munoz, age 90, departed this world for her heavenly home...

Send flowers to the Munoz family.