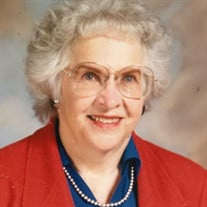 Our community sadly lost a pillar on Thursday, February 14, 2021, when Mary Ann Parks passed away peacefully from natural causes. She was born January 18, 1920, in Cheyenne Wells, Colorado, to August and Grace Tuxhorn. She eloped and married Lawrence Parks in 1936. Mary Ann loved to travel. Her life experiences included going inside the Great Pyramids of Egypt, an African Safari, visiting her European roots, and eventually visiting China. Closer to home, she often took her grandkids on across the country trips showing them the Grand Canyon, Hoover Dam, Painted Desert, with a final stop at Disneyland before driving back from California to Oklahoma. Mary Ann was preceded in death by her husband of 69 years, Lawrence Parks (2005); one son, Johnny Ray Parks (2016); and one daughter, Jo Ann Marie Hollinger (2016). Mary Ann received a BA in education in 1965 and a Master’s Degree in education and special education in the early 1970’s. She taught school from 1966 until her retirement at the age of 72. She was an active member in the Wooden Horse Society where she participated in numerous acuities including many trips. She was a founding member of Indian Springs Baptist Church of Broken Arrow, a homemaker, and a retired schoolteacher. She enjoyed reading Bible scriptures and spending time with her children and grandchildren. Mary Ann is survived by one son and two daughters-in-law: Larry Orvall Parks of Tulsa, and Yvonne Marie Dunford and Carolyn Sue Veal, both of Tulsa; four grandchildren: Cathy, Kyle, Johnny Beau, and Rebecca; five great-grandchildren: Kelsey, Madison, Emily, Quinn, and William, and one great-great-grandchild - Camden. The entire family is appreciative of Mary Ann’s care givers: Aquilla and Charles Guyden. Mary Ann cared very much for them and their family. A funeral service (Family Only) will be held 3 p.m. Friday, February 26, 2021, at Floral Haven Funeral Home in Broken Arrow. Burial will follow in Floral Haven Cemetery. Visitation is from 3 p.m. to 6 p.m., Thursday, February 25, 2021, at the funeral home. Mary Ann’s family and Charles Guyden will serve as pallbearers. Visitation will be held on Thursday, February 25 from 3 pm - 6 pm at Floral Haven Funeral Home. View Funeral Webcast

Our community sadly lost a pillar on Thursday, February 14, 2021, when Mary Ann Parks passed away peacefully from natural causes. She was born January 18, 1920, in Cheyenne Wells, Colorado, to August and Grace Tuxhorn. She eloped and married... View Obituary & Service Information

The family of Mary Ann Parks created this Life Tributes page to make it easy to share your memories.

Send flowers to the Parks family.