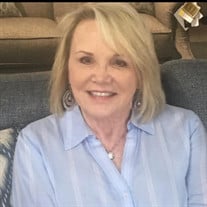 Mary Louise Richards, age 73, of Muskogee (formerly Broken Arrow) peacefully went home to be with her Lord on September 16, 2021 at home with her loving family. Mary “Louise” was born in Stillwater, OK, on September 21st to Clifton and Nina Bryan of McAlester, OK. She graduated from McAlester High School in 1965, after which she attended University of Oklahoma. She was voted Armed Forces Day Queen by the Army Ammunition Depot in McAlester, where she worked as an administrative assistant. Louise later moved to Muskogee, OK. She was a talented interior decorator, as well as a savvy businesswoman. Louise successfully co-owned, then owned and operated Cooper’s Furniture Showcase for 45 years, until she handed the reins to her daughter and son-in-law, Cindy and Jason Dennis. Through the years, Louise was involved in various organizations, such as the Pilot Club (philanthropic), Republic Women’s Club (of which she served as a past President), the Tulsa Mrs. Club and the Bunco gals. She attended Asbury Methodist Church. Louise enjoyed traveling with her husband, Bill, and friends to places, such as Spain, Italy, England, Greece and Switzerland, watching HGTV, and taking long drives. She absolutely loved being around her grandkids, family, extended family and all her wonderful, loyal friends. Most of all she loved her Lord and Savior, Jesus Christ. Louise had a huge, giving heart and never met a stranger. She had a mega-watt smile that would light up a room and will be greatly missed. Louise was preceded in death by son, Bryan L. Cooper; parents: Clifton E. and Nina Bryan; and husband, Bill Richards. She is survived by daughter, Cindy, and Jason Dennis; step-daughter, Leigh, and Kevin Farmer; step-son, Brian, and Kimberly Richards; Grandkids: Bryan “Grayson” and Max Dennis, Bennett and Finley Farmer, Owen and Elliot Richards; Sisters: Marilynne Tisdal, Jeannie and Johnny Douglas, and Barbara and David Sears; Numerous Nieces and Nephews and their families, along with many, many loving friends. We love you and will see you soon! Funeral services will be at Floral Haven Chapel Tuesday, September 21, 2021 at 3pm. Donations can be made in lieu of flowers to AVOW Hospice 2400 North Hemlock Circle, Broken Arrow, OK 74012 (put Mary Louise Richards name in the memo line) or ALS Patient Services Outreach, PO Box 702558 Tulsa, OK 74170-2558. ***FOR THOSE THAT CANNOT ATTEND THE SERVICE IN PERSON, PLEASE COPY AND PASTE THE FOLLOWING WEB ADDRESS IN YOUR BROWSER OR CLICK ON THE LINK: THE LIVE STREAM WILL START AT APPROXIMATELY 2:45 PM. IF YOU DO NOT SEE THE LIVE FEED, PLEASE REFRESH THE PAGE UNTIL IT APPEARS*** http://webcast.funeralvue.com/events/viewer/60639

Mary Louise Richards, age 73, of Muskogee (formerly Broken Arrow) peacefully went home to be with her Lord on September 16, 2021 at home with her loving family. Mary &#8220;Louise&#8221; was born in Stillwater, OK, on September 21st to Clifton... View Obituary & Service Information

The family of Mary Louise Richards created this Life Tributes page to make it easy to share your memories.

Send flowers to the Richards family.