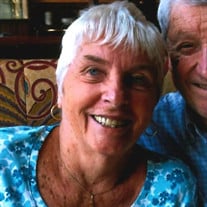 Mary J. Sherman passed away on October 29, 2020 at Brookdale Memory Care Unit from Alzheimer’s. She was born on December, 31, 1931 in Brooklyn, New York to Daniel and Lillian Brown. On October 9, 1954 she married John Sherman. They welcomed their first child Robert Wayne Sherman on May 13, 1958 then their second child John Steven Sherman on January 12, 1960 and then their daughter Geralyn Claire Crenshaw on February 26, 1963. The family moved to Oklahoma in 1977 where they made Tulsa their home. Mary was employed by Oral Roberts University for 19 years. She retired from there in 1996. Mary was an active member in her church, Church of Resurrection, from the time she moved until 2016 when she could no longer attend because of Alzheimer’s had robbed her of her memory. Mary and John loved to travel. They would vacation every year in Hawaii. Mary is survived by her husband John of 66 years; 3 children Robert, daughter in law Anne Marie; John, daughter in law Tracie, and Geralyn Crenshaw, son in law Rick all of Tulsa Oklahoma. Mary was preceded in death by her parents and two brothers Daniel and Thomas as well as her grandson Rick Shannon Crenshaw. She also leaves behind 7 grandchildren: Roberts Jr., Jessica, Amanda, Danielle, Cassey, Caleb, and Ashli. She also leaves behind 9 great-grandchildren Boston, Carter, Dayton, Sophia, Aubrey, Jack, Autumn, Amora, and Emma, as well as a niece Debbie Convoy and many friends. She will be missed greatly by everyone, but know she is in a better place. We would also like to thank Brookdale Memory Care Unit for taking care of Mary for the last two years.

Mary J. Sherman passed away on October 29, 2020 at Brookdale Memory Care Unit from Alzheimer&#8217;s. She was born on December, 31, 1931 in Brooklyn, New York to Daniel and Lillian Brown. On October 9, 1954 she married John Sherman. They welcomed... View Obituary & Service Information

The family of Mary Jane Sherman created this Life Tributes page to make it easy to share your memories.

Send flowers to the Sherman family.