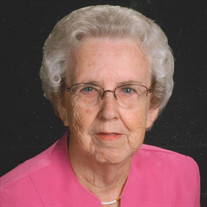 Mary Elizabeth Seibold Tomlinson was born September 18, 1928, the fifth of seven children born to Victor and Viola Seibold. She was born at home, on Nowata Road, in Bartlesville, OK. When Mary was about 18 months old, the family moved to Dewey, OK. Mary attended Dewey schools, graduating from Dewey High School in 1946. She attended one year of Phillips University in Enid, OK. Mary worked briefly in the circulation department of the Bartlesville Examiner-Enterprise. Becoming discouraged in that job, she went to work for Cities Service Oil Company in March of 1948. That's where she met Richard Tomlinson and they married in April of 1950. Mary started her career as a clerk in the Post Office by working as a temporary seasonal worker Christmas of 1952. In February of 1953, she became a regular and retired 31 years later in September of 1983, after having worked in the Dewey and Owasso post offices. Mary and Richard raised a family of two sons and one daughter. They moved to Tulsa in 1971 and joined Highland Park Christian Church shortly thereafter. In their retirement years, they loved to travel the world. Mary also loved to embroider, bowl and work crossword puzzles. All these hobbies ended when her eyesight failed. Mary is survived by two sisters, three children, in-laws, four grandchildren, two great-grandchildren, numerous nieces, nephews and friends. She is survived by her children John and wife LuAnn, Tomlinson, J. Ed Tomlinson (and Liz Nau), and Janet and husband Stephen, Dunbar; grandchildren Philip Dunbar, Joy and husband Richard, Nuckolls, Andrew Dunbar, and Jeremy and wife Mary, Tomlinson; great grandchildren Elizabeth Tomlinson, and Jason Tomlinson, sisters Leona and husband Buddy Edwards, and Dorothy and husband Robert Bennefield; along with numerous nieces and nephews, and other extended family and friends and church family that will forever miss her. She is reunited with her parents Victor and Viola Seibold, husband Richard Tomlinson, and 2 brothers Bob, and Ed, and 2 sisters Ethel and Billie. In lieu of flowers the family is requesting donations to the Happy Hands Education Center 8801 S. Garnett Rd Broken Arrow, OK 74012, 918-893-4800, www.happyhands.org

Mary Elizabeth Seibold Tomlinson was born September 18, 1928, the fifth of seven children born to Victor and Viola Seibold. She was born at home, on Nowata Road, in Bartlesville, OK. When Mary was about 18 months old, the family moved to Dewey,... View Obituary & Service Information

The family of Mary Elizabeth Tomlinson created this Life Tributes page to make it easy to share your memories.

Send flowers to the Tomlinson family.