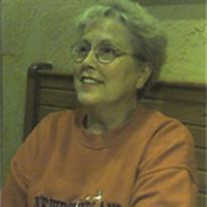 Lerner, Maryann Patrick, born in Newfoundland, Canada February 26,1942 and passed away April 13, 2008 in Tulsa, OK. She was the second daughter of a prominent local fisherman. She met & married a United States Air Force service man in Newfoundland in 1960. They later moved to Texas, Delaware, New York, Alabama, Colorado, Louisiana, Phillipines & Oklahoma. After moving to Altus, Oklahoma in June 1978 she became an active member of the NCO wives club. While in Altus she worked at Friendship Inn, Green Stamp Store & The Booterie. In 1999 she and her husband moved to Tulsa where she managed her daughters dental practice. In October 2005 she was diagnosed with cancer. While living at Sterling House she was a proud participant with the Blue Star Mothers. Coming from a long line of fisherman, Maryann’s favorite pastime was fishing. Whether at the local lake, going for King Salmon in Alaska, or hitting the waters in the Florida Keys, she always loved sitting with her pole & waiting for the big one to bite. She was preceded in death by her husband of 41 years, Edward A. Lerner and her mother Rita & father Robert Oates. She is survived by her son Dr. Robert Lerner (Anchorage); daughter’s, Dr. Deboria Gill (Tulsa), Mariann Fitch (San Diego), 3 grandsons, 1 granddaughter. She is also survived by her sisters Marian & Irene & her brother Eugene and 5 nephews, 4 neices & countless cousins all in Newfoundland. Mom will be missed by all those you’ve touched & loved through the years. We love you! A memorial service will be held at Floral Haven in Broken Arrow on Saturday, April 19 at 1230. Donations can be sent to the Asbury United Methodist Church Cancer Support Group.

The family of Maryann Lerner created this Life Tributes page to make it easy to share your memories.