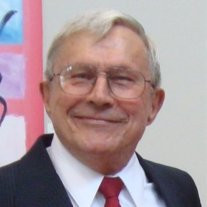 Maurice LeRoy Jordan was born in Alliance, Nebraska on June 2, 1935 to Hattie and Edward Jordan. He was the youngest of seven children. After graduating high school, he attended the University of Wyoming briefly, and then entered the United States Air Force. He served for 26 years, during which time he graduated from the University of Oklahoma with a degree in Electrical Engineering in 1965. On December 14, 1956, he married Kathryn Mick in Carmi, Illinois whom he met while stationed at the Carmi Radar Station. After retirement from the Air Force, Lockheed Martin, Littleton, Colorado, employed him and he worked on payload integration for the Space Shuttle program for ten years. After his second retirement, he and his wife relocated to Tennessee to live near their daughter and her family. In 2007, they moved to Broken Arrow to live near their son and his family. Special friends, Gay, Staci, Mark, Trenton, Cindy, Vickie, Marcus, Kiley, Kelsey, Nancy, Kathy, and numerous church friends of Kevin made Broken Arrow feel like home. He was preceded in death by his mom, Hattie, and dad, Edward, five brothers, Warner, Bob, Stanley, Clark, and Danny, a son, Darin, and a granddaughter, Lindsey. He is survived by his wife, Kathryn, his son, Kevin, and daughter Kimberly. Kevin and his wife, Sheree, daughter, Taylor and her husband, Justin live in Broken Arrow, Ok. Kimberly and her husband, Gerald, of Columbus, Ga, have four children: daughters, Jordan, of Atlanta, Ga, Morgan, of Arlington, Va, Paige, and son Jared, both of Columbus, Ga. He also has one surviving sister, Bonnie Reed of Nenana, Ak. He has numerous nieces and nephews in the US and overseas. Many family members he gained through his wifeâ??s family also survive Maurice. Maurice enjoyed fishing, walking fish, watching court shows, playing solitaire on the computer, playing poker, fixing things, playing with his grandkids, and was proud to be a veteran of the USAF.

Maurice LeRoy Jordan was born in Alliance, Nebraska on June 2, 1935 to Hattie and Edward Jordan. He was the youngest of seven children. After graduating high school, he attended the University of Wyoming briefly, and then entered the United... View Obituary & Service Information

The family of Maurice LeRoy Jordan created this Life Tributes page to make it easy to share your memories.

Maurice LeRoy Jordan was born in Alliance, Nebraska on June 2,...