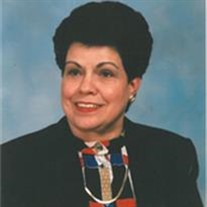 Maxine went to be with her Lord and Savior, Jesus Christ, in heaven on October 5, 2012. Born on January 29, 1936 to Frank and Olive Metcalf on a farm near McCune, Kansas; the family later moved to McCune where, she grew up with her sister (Wanda) and two brothers (William and Frank, Jr.). She graduated from McCune H.S. in 1954 and attended Coffeyville Junior College. Maxine was married to Jack Dean Lynam on May 18, 1957 in Parsons, KS. The couple resided in Bartlesville, OK where Jack began his 30 year business career with Cities Service Oil Company. The couple relocated with their two children (Cindy & Mickey) to Tulsa, OK in 1967. While raising her family, Maxine pursued a career as a beautician, which included owning her own beauty shop. Devotion to family and church were top priorities- the family was long-time members of Aldersgate United Methodist Church and more recently, Maxine and Jack were founding members of Village Congregation Church in South Tulsa. Maxine enjoyed family vacations with her grandkids and spending time at their family retreat on Grand Lake. Maxine will be remembered for her love of God, devotion to family and friends, servantâ??s heart, positive attitude and her homemade noodles and Christmas cookies. Maxine was preceded in death by her parents, brother (Frank, Jr.) and infant son (Jeffrey Dean). She is survived by her husband, Jack, her children and their spouses, Cindy and Bill Sawyer of Tulsa, Teri and Mickey Lynam of Plano, TX, her grandchildren Stephen, Chris and Jason Sawyer of Tulsa, and Erin and Katie Lynam of Plano, TX, brother and sister-in-law William and Carole Metcalf of Greenville, SC, and sister Wanda Wadlow of Dallas, TX. Also included in the surviving family are numerous cousins, nieces and nephews that she adored and loved. Maxine had a giving heart, and if you would like to honor her memory, the family requests contributions to be made to the Village Congregation Community Church Building Fund or the charity of your choice. The family would like to thank Saint Francis Hospice for the loving care and comfort they provided. Visitation will be Tuesday, October 9th from 6 p.m. to 8 p.m. at Floral Haven Funeral Home 5500 S. 129th East Ave., Broken Arrow, OK 74012; phone 918-615-4380. Funeral Services will be Wednesday, October 10th at Floral Haven at 12:30 p.m. officiated by Pastor Chris Thompson, with graveside services to follow.

Maxine went to be with her Lord and Savior, Jesus Christ, in heaven on October 5, 2012. Born on January 29, 1936 to Frank and Olive Metcalf on a farm near McCune, Kansas; the family later moved to McCune where, she grew up with her sister (Wanda)... View Obituary & Service Information

The family of Maxine L. Lynam created this Life Tributes page to make it easy to share your memories.

Maxine went to be with her Lord and Savior, Jesus Christ, in...