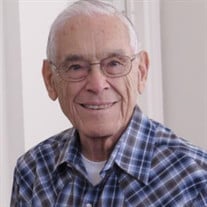 Maynard “Bud” Hammans was called home to be with his Lord on Friday, April 3, 2020 at the age of 89. After months of failing health, he died peacefully within his home in Broken Arrow, OK with family by his side. Bud was born February 28, 1931 near Callaway, NE to Forrest and Ruby Hammans. He was preceded in death by his parents, two brothers (Forrest Jr. and Dale), and a sister (Veneda). He was raised during the Great Depression, which engrained in him the value of hard work. In fact, he began earning his own money as a shoe shine boy at the young age of 13. He was later mentored by the owner of a grocery store who taught him initiative, time management skills, and how to be a meat cutter. Bud enlisted in the Air Force during the Korean War as a jet mechanic. He then was led to obtain a bachelor’s degree in Bible from Harding University (where he met the love of his life) and a master’s degree in Biblical Studies from Eastern New Mexico University. Bud and his wife became missionaries to Japan (serving those stationed at the Yokota Air Force Base and providing monthly services to a Japanese church); they later served in Australia (strengthening the church). Bud was also a faithful minister of the Church of Christ in Bula, TX, Dora, NM, Loveland, CO, Antlers, OK, Derby, KS, Rochester, MN, and Walsenburg, CO. He also served as a hospital chaplain at Mayo Clinic in Rochester, MN. In each location where Bud resided, he sowed kingdom seeds, sharing the hope he had in Jesus by studying the Bible around the kitchen table, the heart of the home. In his later years, Bud (and Sue) served in prison ministry using “New Life Behavior” and helped Chinese Americans to improve conversational English using “FriendSpeak”, a Bible based program. Bud was innovative and had a gift for using his hands to take apart or fix anything. However, the way he would want to be remembered the most is how he used those same hands to comfort and encourage others. He might be found praying with a family during early morning hours before surgery, grieving alongside a family over the loss of a loved one, studying the Word with searching hearts, writing precious notes to family members, or holding his wife’s hand before gifting it with a kiss. Even in his twilight years, he would offer a compliment or a kind touch to hospital or hospice caretakers. His teasing, sparkling eyes, his winsome smile, and his servant hands left their mark on many lives. Dearest Bud is survived by his bride of almost 64 years, Vada “Sue” (Billingsley) Hammans, his children Felicia Hammans of Broken Arrow, Mark Hammans (Lori) of Loveland, CO, and Cindy Yeats (Wayne) of Broken Arrow. He was a treasured grandfather to Kenny (Brittany) and Tyler (Ashley) Hammans, Hunter Yeats, and Hannah Yeats de Hernandez (Oscar). He is also survived by a beloved sister, Faye Berkheimer, of Columbus, NE, as well as many nieces, nephews, and dear friends. A memorial service is pending. Inurnment will follow at Ft. Gibson National Cemetery in Ft. Gibson, OK. (A part of his heart will always be in Colorado.  Memorial Contributions may be made to: World Bible School P.O. Box 2169 Cedar Park, TX 78630 -----Donations can be made online at: https://give.worldbibleschool.net/page.aspx?pid=298 (“Tribute Information” is near the end of the WBS webpage) “If you would like to honor my memory, invite a friend into your home, stop to enjoy the starry hosts, visit a Colorado mountainside, consider the lilies, notice a hummingbird or a cardinal, pause at the sunset of a glorious day, eat a cinnamon roll or a bowl of ice cream………and count your blessings……” With Paul, Bud would say, “I have fought the good fight, I have finished the course, I have kept the faith;….there is laid up for me a crown of righteousness…” II. Tim 4:7 -----BUD HAMMANS….His godly life was well lived and he was well loved! -----------------------verses that inspired Bud and his family follow: “By the word of the LORD the heavens were made, their starry host by the breath of his mouth.” Psalms 33:6 …….“Look at the birds which fly in the air: they do not sow or reap or store up in barns, but your Heavenly Father feeds them. Are you not of much greater value than they? Consider the lilies of the field, how they grow. They toil not, neither do they spin; but I say unto you, that even Solomon in all his glory was not clothed as one of these. Mt. 6:26, 28-29 “From the rising of the sun to its setting place, indeed, every animal of the forest is mine, even the cattle on a thousand hills.” Ps. 50:1, 10-11 ---------Bud loved nature!! “For the LORD your God is living among you. He is a mighty Savior. He will take delight in you with gladness. With his love, he will calm all your fears. He will rejoice over you with joyful songs.” Zeph. 3:17 ---------Sue receives great comfort from this verse. “Praise the LORD! Blessed is the man who fears the LORD, who greatly delights in his commandments! His offspring will be mighty in the land; the generation of the upright will be blessed.” Psalms 112:1-2…………. “Their descendants will be known among the nations and their offspring among the peoples. All who see them will acknowledge that they are a people the Lord has blessed.” Is. 61:9 ---------the Hammans’ legacy “Iron sharpens iron, and one man sharpens another.” Proverbs 27:17........“Show yourself in all respects to be a model of good works, and in your teaching show integrity and dignity.”…Titus 2:7 ---------Bud gave and received wise counsel. -------------------“A good name is to be more desired than great wealth. ---------------------------------Favor is better than silver and gold.” Prov. 22:1 --------------------------------------------BUD HAMMANS ----------------------------------------- 2/28/1931 – 4/3/2020

Maynard &#8220;Bud&#8221; Hammans was called home to be with his Lord on Friday, April 3, 2020 at the age of 89. After months of failing health, he died peacefully within his home in Broken Arrow, OK with family by his side. Bud was born... View Obituary & Service Information

The family of Maynard "Bud" Hammans created this Life Tributes page to make it easy to share your memories.

Maynard “Bud” Hammans was called home to be with his Lord on...

Send flowers to the Hammans family.