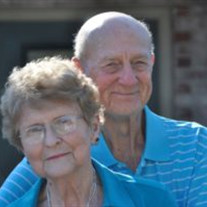 Olivette McLure was born on July 16, 1933 to Cliff and Jeanette Shankle in Laredo, Texas.  Growing up in Laredo she became fluent in Spanish and had a life long appreciation for Mexico. She was part of a Baptist Church where she was baptized. She graduated from Martin High School in 1950 where she sang in the chorus.  She attended college for a couple of years before going to work for the Boy Scouts of America in San Antonio.  In January 1954 she had a blind date with Don McLure, a U.S. Air Force pilot stationed in Laredo.  It was the best blind date for both of them and they were married on June 23, 1954. Don was stationed in Panama City, FL for three years and Sherry was born there on March 14, 1955.  They moved to Fort Worth in 1957 where Don worked for Convair as an Engineer.  Suzi was then born in Fort Worth on February 7, 1958.  In 1960 Don went to work for American Airlines in Tulsa, OK and their son Richard was born there on October 5, 1966.  Late in 1966 Don took a position with American in New York City and the family lived in New Jersey.  In 1968 the family moved to Fort Worth, Texas and then back to Tulsa in 1977. Olivette had strong social skills.  People were very important to Olivette and she drew them in with her warmth and hospitality.   She served as a Docent at Gilcrease Museum for 15 years and loved that work.  She further served as the President of the Ostomy Association in Fort Worth and Tulsa.  She ministered as both a Deacon and Elder at Kirk of the Hills Presbyterian Church.  She was also involved there in helping refugees and for decades in Women of Worth.  Olivette and Don participated in small groups at the Kirk.  And she further helped with the John 3:16 Mission. Don and Olivette loved to travel and they were privileged to see a lot of the United States and several places outside of the United States. Olivette is survived by her husband Don.  She is survived by her children: Sherry (and Hank) Pharis of Fargo, ND; Suzi of Tulsa; Richard (and Florence) of Dallas, TX.  She is further survived by her grandchildren: Amaris Burris (and Shawn) of Tulsa; William Pharis (and Gayathri) of Austin, TX; Jonathan Pharis of Fargo, ND.  She is also survived by two great grandchildren: Gabriel Burris and Kaydee Garner of Tulsa. Memorials may be sent to the Kirk of the Hills in Tulsa.

Olivette McLure was born on July 16, 1933 to Cliff and Jeanette Shankle in Laredo, Texas.  Growing up in Laredo she became fluent in Spanish and had a life long appreciation for Mexico. She was part of a Baptist Church where she was baptized.... View Obituary & Service Information

The family of McLure, Olivette created this Life Tributes page to make it easy to share your memories.