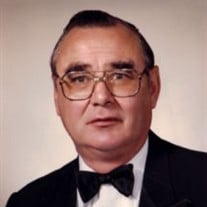 Merl Keith Houser age 85 of Tulsa, OK. died at home Dec. 28, 2019 at home.Merl was born Feb. 6, 1934 in Paradise, Kansas to Herman A. Houser and Pansy E.(Henry) Houser. He was the third of five boys born to Herman and Pansy.Merl attended 12 years of school in Paradise and graduated Valedictorian of his class in May of 1952. He then attended two years of college at Kansas Wesleyan University in Salina, Kansas before transferring to Ft. Hays Kansas State College, where he graduated with a BA in Economics in May of 1958. His schooling was briefly interrupted by a two year term in the Army, where he spent most of his time with Battery C of the 91st Armored Field Artillery Company of the 1st Armored Division.Merl married Willa Mae Murphy on Aug. 31, 1962 in Mills, WY. This marriage was blessed with three children John and Tom Houser of Tulsa, OK. and Jennie Chumney of Broken Arrow, OK.Merl was active all his life in the Methodist Church and was a charter member of St. Matthew United Church in Tulsa, OK. before transferring his membership to the First Methodist Church in Bella Vista, AR.He was a member and Past Master of Pilgrim-Rock Lodge #522 in Tulsa and a 32 degree mason in The Scottish Rite, Tulsa Valley. He was also a member of The York Rite and Akdar Shrine Temple both of Tulsa, OK.Merl worked his entire career of 33 years at Amoco Production Company in Casper,WY. and Tulsa, OK. as an Accountant and Accounting Supervisor. He was active in many Petroleum Accountants Society of OK. (PASO) and the National Society of Petroleum Accountants (COPAS) where served on the National Board of Directors for several years as Chairman of Joint Interest Committee and as Secretary, Treasurer and Vice-President of the national organization.Merl was preceded in death by both parents and all four brothers.He is survived by his wife Willa; three children; seven grandchildren; two step-grandchildren; and ten great – grandchildren and a host of friends.Funeral services will be held on Sat. Jan. 4 at 10:00 am, Viewing starts at 8:45 am. Reception to follow.Floral Haven 6500 S. 129th East Ave. Broken Arrow, OK. 74012

Merl Keith Houser age 85 of Tulsa, OK. died at home Dec. 28, 2019 at home.Merl was born Feb. 6, 1934 in Paradise, Kansas to Herman A. Houser and Pansy E.(Henry) Houser. He was the third of five boys born to Herman and Pansy.Merl attended 12... View Obituary & Service Information

The family of Merl Keith Houser created this Life Tributes page to make it easy to share your memories.