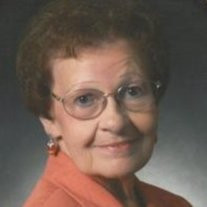 Colette Helen Merrifield was born on August 22, 1933 in Tipton, Missouri and passed away January 4, 2014 at age 80 with her family by her side. Colette and her beloved late husband Jack Merrifield were married for 58 years and have been residents of Broken Arrow since 1963. Colette worked as a registered nurse at St. John Hospital in Tulsa after graduating in 1954 from St. Mary College in Leavenworth, Kansas. She spent several years away from her nursing career to care for her four sons before accepting a position in 1978 at the Franciscan Villa Senior Living Community in Broken Arrow. Colette retired in 2001 as Director of Nursing at St. Clare’s where she cared for the retired nuns from Our Lady of Sorrow’s Convent. Colette and her husband Jack were members of St. Benedict’s Catholic Church in Broken Arrow. They both shared a deep commitment to their faith and cherished the loving friendships with many in their church community. Colette dedicated herself to her family and thoroughly enjoyed cooking and baking for her children and grandchildren as well as attending their school and sporting events. She is preceded in death by her parents, Urban and Helena Bestgen, along with brothers Connie, Leonard and Arnold John Bestgen, and sister-in-law Helen Bestgen. She is survived by her four sons: Steve Merrifield and wife Cindy, John Merrifield and partner Sergio Garcia, Mike Merrifield and wife Theresa, Gary Merrifield and wife Karen; nine grandchildren, Elizabeth Latta and husband Tyler, Rebecca Leach and husband Landry, Matthew Merrifield, Alex and Jenna Merrifield, Sarah, Greg, Jack and Abby Merrifield; great grandson, Luke Latta; brother Garland Bestgen; sister-in-laws Karlene Bestgen and Betty Bestgen; and many nieces and nephews as well as several great nieces and nephews. Colette will be remembered as a loving wife, mother, grandmother, sister, aunt and friend. Her kind generous spirit will live on through her family and she will be dearly missed. In lieu of flowers, please make donations to the Catholic Charities of the Diocese of Tulsa or Clarehouse Hospice Services of Tulsa.

Colette Helen Merrifield was born on August 22, 1933 in Tipton, Missouri and passed away January 4, 2014 at age 80 with her family by her side. Colette and her beloved late husband Jack Merrifield were married for 58 years and have been residents... View Obituary & Service Information

The family of Colette Helen Merrifield created this Life Tributes page to make it easy to share your memories.