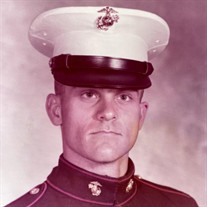 Michael Donald Church, 68, of Tulsa, OK passed away Thursday, December 10, 2020 at St. Francis Hospital, Tulsa. Mike, as he was also known, was born December 7, 1952 to Donald Chesterfield Church and Doris Delilah Herring Church in Tulsa, OK. He was raised there and graduated from Edison High School in 1970. Upon graduation he went to Oral Roberts University (ORU) for about three years and then enlisted in the Marines Corps in 1974. His service began at Camp Pendleton in California during the end of the Vietnam War and was later stationed mostly in Okinawa. There was also time spent on the USS Midway around Yokosuka, Japan, which he said, was an experience. He was honorably discharged as a corporal in May 1977 and joined the Marine Reserves where he served as a Personnel Clerk and Administrative duties. Mike received various recognitions and medals while serving which included the Rifle Marksman Badge, National Defense Service Medal, Meritorious Master, and Good Conduct Medal. After the Marines he worked as a shipping clerk with Unit Rig, sales, a 911 operator and then Papa Johns. Mike so loved his children. His wife Janet and he had 2 children, Emily Dawn, born March 1985 and Adam Eli, born September 1987. Later he married Mindy and had a son Michael Taylor, born August 1992. Mike loved to tell stories about his experiences in the service and how it brought out his love of country. Even though he was non-combative service, the protocol of being a Marine and respect for his country was deep rooted. Mike is survived by his daughter, Emily Dawn Lawson and husband Whimpy of Eufaula, OK; sons Adam Eli Church and wife Jessica of Porter, OK and Michael Taylor Church of Owasso. His grandchildren are Ella and Harlee Church. Mike was preceded in death by his parents Donald Church and Doris Church; siblings James Joseph Church and Melony Church Yatsco. Graveside Services will be held 12:30PM, Thursday, December 17, 2020 at Floral Haven Memorial Gardens.

The family of Michael Church created this Life Tributes page to make it easy to share your memories.

Send flowers to the Church family.