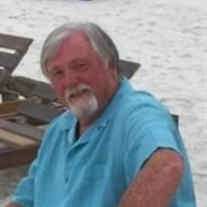 Michael “Mike” Ralph Magill Oct 16, 1951-March 8, 2020 Michael “Mike” Ralph Magill died on March 8, 2020 in Tulsa, Okla. at the age of 68, the son of J.R. “Jake” and Fern Magill. Mike was born in Tulsa on October 16, 1951. A Celebration of Life service, will be held on Friday, at 3 pm, in the Floral Haven Funeral Home Chapel in Broken Arrow, Okla. A Funeral Mass will be held at St. Elizabeth Catholic Church in Grove, Okla. on Saturday at noon. Mike made a lasting impression on everyone’s heart. Whether he was teaching people to fish, to water ski, riding to a Sturgis motorcycle rally, or cheering on his grandchildren in their activities. Mike loved life. As the center of his family, he always said to his girls “Have I told you today…” and they would answer back “I love you too.” Every day, Mike told Susan that she was beautiful and that he loved her. At his grandson’s last college basketball game, Cory made a three pointer and Mike proudly yelled out “That’s my boy!” Life was always an adventure with Mike, with Susan by his side. As a private pilot, professional fishing guide, avid golfer, boater and hunter he loved to share his knowledge with other people. He especially enjoyed flying his drone and smoking something tasty on the grill for friends at Grand Lake. These varied adventures provided plenty of material for his entertaining storytelling – some of which you weren’t sure were completely true. Mike graduated from Tulsa’s Memorial High School, then attended Northeastern Oklahoma A&M Junior College (NEO) where he played on the golf team. He and Susan met on a blind date at NEO and were married in 1970. He joined the U.S. Navy in January 1971, based in San Diego, and won their Pacific Coast Men’s Regional Golf Championship in 1974. After his service as a Navy hospital corpsman he returned to the University of Tulsa where he played golf as well. Mike’s experience in the Navy led to a successful career in medical sales, then later his love of fishing turned professional as a fishing guide and owner of Jugs by Bert. After retiring two years ago, Mike and Susan were able to travel to San Diego, Alaska, the Panama Canal, New England, and Washington D.C. They were planning their 50th wedding anniversary cruise to the British Isles for this summer. 2 / 2 Preceding Mike in death are his father J.R. “Jake” Magill, his mother Fern Magill, and son-in-law Nathan Lane. Mike is survived by his wife, Susan Magill, daughters, Lisa Shockley and Jenny Dye, and son-in-laws, Dean Shockley and Lane Dye. His surviving grandchildren are Cory Lane, Joshua Shockley, Logan Shockley, Isabella Shockley and Layden Michael Dye. Other surviving family members include mother-in-law Deloris Raines, sister-in-law and brother-in-law Brett and Debbie Baugh, plus niece and family, Frank and Kara Younce, and Braxton and Grayson. Surviving cousins are Mike and Sue King, and Angie and Kelly Hoffschneider, Ethan, Liam and Grace. Mike’s constant Maltese companions, Sammie and Mickey, will miss him greatly.

The family of Michael "Mike" Ralph Magill created this Life Tributes page to make it easy to share your memories.

Send flowers to the Magill family.