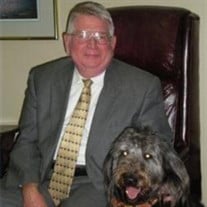 Michael E. Yeksavich, 77, of Tulsa, Oklahoma passed away on March 30, 2021 surround by loved ones. Born May 24, 1943 in Quanah, Texas to Edmund and Melba Katherine (Kay) Yeksavich, Michael graduated from Eldorado High School in Oklahoma and went on to earn a Bachelor’s Degree in Agricultural Economics from Oklahoma State University and a Juris Doctorate from the University of Tulsa. As a child and adult, Michael traveled the world with his family in service of the country with stops in Japan, the Philippines, South Korea, Germany, Mississippi, New Mexico, and Texas. Following in the tradition of his father, an Air Force Sergeant, Michael entered the U.S. Army in 1968 and rose to the rank of Major in the Judge Advocate General’s (JAG) Corps. He took great pride in his nearly 10 years of service and the traditions of the U.S. military. Michael met the love of his life, Reba Jean Myers, in high school and found the courage to propose to her during a snow covered rabbit hunt that resulted in only one “yes” and no harmed bunnies. Michael and Reba were married in 1963 in Eldorado, Oklahoma. They lovingly built a family during his time in the service and eventually settled in Tulsa where he established his law practice. Michael engaged in nearly every area of the law over his long career with his utmost joy being able to unite hundreds of families through his adoption practice. He was honored to be named as one of the Angels of Adoption by the Congressional Coalition on Adoption Institute and to be a founding member of the Muscogee (Creek) Nation Bar Association. An avid reader, Michael was capable of reading all the paperback books at the local Tulsa County Library branch in a week. His most treasured moments were those he spent with his family and their joy. He shared his sense of humor with his family, which extended to numerous less than successful cooking attempts of discovered recipes. He passed his love of music, performance, sports, and learning to each of his children. As a person of faith, he routinely read a Bible verse before bed each night and knew he would join his loved ones after passing. He is preceded in death by his daughter, Catherine Lynn. He is survived by his wife Reba, his son Aaron, his daughter Dara and husband, Brian Wilson, and their son, his most beloved grandson, Henry August, his son Jeramiah, his sister Karen Jurhee Blaigaich and husband, Pete, and their children Heather and Martin, and his brother Jerry Yeksavich and wife, Melinda. Memorial services to be held on Saturday April 10, 2021 at 10 AM CST at the Floral Haven Funeral Home Chapel with a light reception to follow. In lieu of flowers, donations may be made in his memory to Reece's Rainbow, Special Needs Adoption Support (https://reecesrainbow.org/) or the American Kidney Fund (https://www.kidneyfund.org/). ***FOR THOSE THAT CANNOT ATTEND THE SERVICE IN PERSON, PLEASE COPY AND PASTE THE FOLLOWING WEB ADDRESS IN YOUR BROWSER OR CLICK ON THE LINK: THE LIVE STREAM WILL START AT APPROXIMATELY 9:45 AM. IF YOU DO NOT SEE THE LIVE FEED, PLEASE REFRESH THE PAGE UNTIL IT APPEARS*** http://webcast.funeralvue.com/events/viewer/51546

Michael E. Yeksavich, 77, of Tulsa, Oklahoma passed away on March 30, 2021 surround by loved ones. Born May 24, 1943 in Quanah, Texas to Edmund and Melba Katherine (Kay) Yeksavich, Michael graduated from Eldorado High School in Oklahoma and... View Obituary & Service Information

The family of Michael Edmund Yeksavich created this Life Tributes page to make it easy to share your memories.

Michael E. Yeksavich, 77, of Tulsa, Oklahoma passed away on March...

Send flowers to the Yeksavich family.