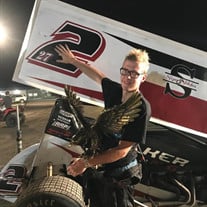 Mickey Walker June 13, 1997 – January 5, 2021 Long-time local sprint car driver Mickey Walker, 23, took his final checkered flag on Tuesday, January 5, 2021, when he passed away at his home in Sapulpa. Mickey was born Friday, June 13, 1997, in Tulsa to Annita and Kenneth Walker of Claremore. He attended Broken Arrow schools through 10th grade and graduated from Verdigris High School in 2016. At Verdigris, he was a goalkeeper for the Class 4A Boys State Champion Cardinal soccer team. His senior season, he earned All-State recognition and helped the Small East team win the 2016 All-State Game. Mickey was born into a racing family, making his first appearance at the track when he was just a week old. He was a fourth-generation racer and started racing in 2002 at the age of 5, following in the footsteps of his dad, Kenneth, his papa, Terry Walker, and his great-grandpa, J.D. Walker. Over 19 seasons, Mickey accomplished great things on the race track. He raced in the Kid’s Club Division with the Tulsa Kart Club, then moved on to Micro Sprints, racing at Will Rogers Raceway and Port City Raceway. Throughout the years, he also raced at the Tulsa Shootout, the Chili Bowl and competed in the ASCS2 Series. In 2009, he was crowned Restricted ‘A’ Class Champion at Will Rogers Raceway. That same year, he won his first A-Feature on his 12th birthday. In 2011, Mickey was crowned Restricted ‘A’ Class Champion at the Pete Frazier Memorial at Port City. One year later in 2012, he was the Port City Restricted ‘A’ Class Champion. In 2013 at the 28th Annual Tulsa Shootout, Mickey won his ‘A’ Class Qualifier, finished in the Top 10 of the ‘A’ Class A-Feature, and finished in the Top 5 of the Restricted ‘A’ Class. That same year, he moved to the Champ Sprint 2BBL Class. He competed at Creek County Speedway and with the traveling Oil Capital Racing Series (OCRS), winning his first Sprint Car A-Feature. Mickey also competed with the American Sprint Car Series Sooner Region. In 2014, Mickey won his first ASCS Sooner Region A-Feature at Creek County Speedway. While there were many A-Feature wins along the way, the biggest win of his racing career occurred in 2017 at the OCRS AmeriFlex Challenge 2 at Salina Highbanks Speedway. Mickey left this world a champion. He was the 2020 Creek County Speedway Champ Sprint Champion. Professionally, he began working at American Airlines in May of 2019 where he was a licensed airframe and power plant mechanic. In 2019, he met the love of his life, Kylee Crockett and their relationship blossomed. They were engaged on Sept. 20, 2020 and planned their “Forever Day” on Sept. 3, 2022. Mickey attended HillSpring Church in Sand Springs where he volunteered with several church projects. Racing was Mickey’s life and he enjoyed sharing his passion for the sport with his family whom he also loved. He is survived by his fiancée, Kylee Crockett of Sand Springs; his mother, Annita Walker of Broken Arrow; his father, Kenneth Walker and wife, Saundra, of Sapulpa; his sister, Laura Walker of Sapulpa; his maternal grandmother, Twilla Pitcock of Broken Arrow; his paternal grandmother, Bobbye Walker of Claremore; his grandparents, James and Virginia Hughes; his uncle, Bobby Pitcock and wife, Melinda, of Coweta; his aunt, Dayna James and husband, Billy, of Claremore and several cousins and extended family members. Mickey is preceded in death by his maternal grandpa, Bob Pitcock and his paternal papa, Terry Walker. Funeral services will be held Friday, Jan. 15, 2021, at 10 a.m. at HillSpring Church in Sand Springs for Mickey Walker, 23, of Sapulpa. Pastor Brent Kellogg, Matt Barnett, and Mike Brown will officiate the service. Pallbearers will be Kris Carroll, Craig Carroll, Ronny Paeper, Bobby Pitcock, Bobby Allen Pitcock, Terry Mattox, Philip Gourley Mike Hefley (lead), Tim Hefley, Ron Brown Jr., David Cagle, Ben Ellis, Carter Williams, JJ Pearson and Ben Adams. Interment will be in Floral Haven Cemetery in Broken Arrow under the direction of Floral Haven Funeral Service.

The family of Mickey Dennis Walker created this Life Tributes page to make it easy to share your memories.

Send flowers to the Walker family.