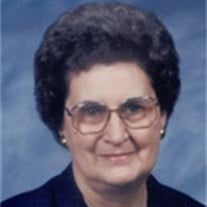 Mildred Bernice Huber Millender – “Bernice”, January 25, 1932 – August 2, 2010. Thoughtful, loving, devoted, considerate and kind. These are just some of the words we use to describe our Sister, Mother, Grandmother and friend. To her family she was the Sun around which we revolved, spreading her love and light on all of us equally. She made each of us feel special and was always there to listen, guide and support us. Her love for her family was present in all she said and did. She was loved dearly and will be missed terribly. Mom was guided in life by her unwavering faith in God and a simple ethic instilled in her by her parents, “work hard, be humble and independent and help others”. She was born to Blase and Mildred Huber and grew up in Hartford, Arkansas. She was the oldest of three children, and is survived by her sister and brother, both to which she was extremely close and whom she loved very much. She graduated from Hartford High School in 1950, and moved to Tulsa to seek employment. Her career spanned nearly 50 years primarily in the oil and gas industry as an executive secretary and bookkeeper. She married and had five children, Michael, Patricia (who died two weeks after birth), Patrick, Mary and Sheila. When her first marriage ended, she was left with the responsibility of raising four children by herself and working to support them. She did so with determination and without complaint. She demonstrated to her children how to deal with and overcome adversity. She was and always has been a perfect role model for us. In 1971, she married Loyd Millender and gained another son, Kevin. Loyd provided Mother with so much love and support and was a great father. They both enjoyed square dancing and were life long members of Pairs and Squares which became the center of their social life and the source of many life-long friendships. They joined the parish of Sts. Peter and Paul Catholic Church in 1971, and were active members. She was a member of the Catholic Daughters of the Americas, to which she contributed many hours in support of its mission. The relationships she developed as a member of the Church and especially the Catholic Daughters were dear to her heart and helped sustain her spirit during the last years and months of her life. After retiring, Mother sought other opportunities to help where she could. In 1995, she began volunteering as a Tulsa Airport Ambassador working in the information booth. Answering questions with a smile and helping strangers, came easily to her and she approached her “job” seriously. She knew strangers were depending on her for accurate information and to many she was the first friendly face theyâ??d see in Tulsa. Her volunteer service extended 13 years when illness kept her from continuing. When Loyd passed away in 1993, a neighbor invited her to join a “Dinner Group” (thatâ??s what she called it) of widows through which she met and made many very dear friends. The depth of their love for her was especially felt by the family the past few months and days. Our Mother is survived by her sister, Dorothy Barton and her husband William of Fort Smith, AR and her brother, Thomas Huber and his wife Shirley of Greenwood, AR. Children: Michael Kuykendall and his wife Brenda of Moore, OK, Patrick Kuykendall and his wife Paula of Broken Arrow, OK, Mary Almy and her husband Mike of Sand Springs, OK and Sheila Dillard and her husband JR of Broken Arrow, OK. Grandchildren: Shane Kuykendall, Misti Kuykendall, Kile and Cassie Kuykendall, Kassi Millender, Shelly and Blake Collins and Dennis and Amanda Almy. Great-grandchildren: Damon, Gavin, Wilder, Gwyneth, Destiny and Adalyn. She was preceded in death by her parents Blase and Mildred Huber, her husband Loyd, daughter, Patricia and son, Kevin. The family would like to express our heart-felt thanks to all of her friends that supported her throughout the difficult times in her life and especially those who comforted her these past few months, weeks, and days. Your love and support helped sustain her spirit more than you will ever know. For that we are eternally grateful. She was a wonderful woman and will be truly missed by all who knew her. A Rosary will be held for Mother in the chapel at Floral Haven Funeral Home at 7:00 pm, Friday, August 6th. A Resurrection Mass will be held at Sts. Peter and Paul Catholic Church at 10:00 am, Saturday August 7th. Interment will be at Floral Haven Cemetery following the Mass and dinner will be served in the Floral Haven Family Center after a short grave side service. All friends of the family are invited to attend both the graveside service and the dinner. In lieu of flowers, donations may be made to Catholic Daughters of the Americas c/o Sts. Peter and Paul Catholic Church, 1436 North 67th East Avenue, Tulsa, OK 74115. This obituary was published in the Tulsa World on 8/5/2010.

The family of Mildred Bernice Millender created this Life Tributes page to make it easy to share your memories.