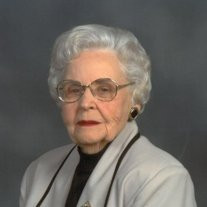 Mildred L. Brown (Millie), 95, of Tulsa, Oklahoma passed away Saturday about 10:00 PM at Saint Simeon’s Home. Millie was born September 14, 1917 to Frank and Bessie Rice in Henryetta, Oklahoma, the sixth of nine children. Her family moved frequently around eastern Oklahoma following road-building projects. She graduated from Central High School in Tulsa in 1934, and then from Tulsa School of Cosmetology. She worked several years as a hairdresser. She met her future husband, Ross Brown in Tulsa. In 1942 they were married in New Haven, Connecticut, where he was attending officer training, prior to his deployment with the US Army Air Corps to the European theater in World War II.When he returned from the war, they made their residence in Tulsa, where most of both families lived. They had one son, Mike. Millie grew up attending church, and after the war, was a faithful and active member of Trinity Episcopal Church, where her membership remained the rest of her earthly life. She served in altar guild, and taught Sunday school. She made sure Mike was in church every Sunday, and said his prayers each day. Her faith played out in her love of friends and family, and her sacrificial service to others.The little family was very close to extended family on both sides, and enjoyed great family gatherings at every opportunity. When her mother was no longer able, Millie and Ross became the propagators and hosts of those gatherings for a span of more than 35 years. She was a caregiver and advocate to many in the family, which characterized her as a loving, caring servant. She was loyal to, and fully devoted to family, delighting in every person. Her family will always remember her as an extraordinary wife, mother, grandmother, great grandmother, and mother-in-law to Cheryl with whom she had an especially loving mutual bond. She loved having her granddaughters over for slumber parties, and working on little sewing projects with them. They, likewise, delighted in those very special encounters. She was a nucleus around which her family gathered. At the same time, she was very discrete and self-sufficient, careful to avoid what she perceived might be intrusion.Millie was a classical product of the great depression. She was frugal, yet generous, loving and compassionate, gracious, content, industrious and hard-working. She was a good cook who minded the table presentation as well as the food. She was also a diligent homemaker. She took pride in her home, and decorated it with care, then worked hard to maintain it as a welcoming place, not ostentatious, but homey.Millie had a strong desire to create things, another testimony to the image of her Creator within her. Her interests and talents were diverse. She enthusiastically engaged in oil and watercolor painting, woodcarving, reupholstering, flower art, and quilting, and all kinds of sewing and other needlework arts. Many friends and family have enjoyed the fruit of her creative endeavors. Her sewing talents also served the altar guild at Trinity where for many years she became the go-to person for maintaining the intricate and often elaborate vestry clothing and altar linens.After the war, vacation every year consisted of two weeks at a lodge in northern Minnesota fishing with Ross and Mike, sightseeing, and fellowshipping with family, and of course the family Labrador Retriever. This vacation was a multi-generational, time-honored tradition. She also enjoyed her crafts on these trips. Fried fish, fresh home-grown tomatoes and onions, tall pine trees and birches, ducks and loons, and fishing in two or three different lakes or streams every day, and sometimes at night–those were treasured times. Mike, Cheryl and her granddaughters Leslie and Leanne were able to share in that legacy and those memories with Millie.Her last six years were spent at Saint Simeon’s Home, a senior care home second to none. Millie had been an active member of the St. Simeon’s auxiliary since its founding in 1960. She had actually anticipated going there one day, and gladly did so when the time came. A special thanks to her Saint Simeon’s family.She was preceded in death by Ross, her beloved husband of 44 years, two sisters and six brothers. She is survived by son Michael and wife Cheryl Brown, by two granddaughters Leslie Ball and husband Brian, and Leanne Phelps and husband Nathan, by great grandchildren Brittany, Braden, Noelle, and Ross, and by a host of nieces and nephews who affectionately called her “Mimmie.” She was cherished by the entire family who share fond memories spent in her home, and she in theirs, and likewise by many friends.

The family of Mildred L. “Millie” Brown created this Life Tributes page to make it easy to share your memories.