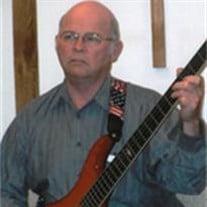 Miles Marvin Scott was theÂ 2ndÂ child born to Billie Leo and Ophelia Ward Scott on April 24, 1954 in Chickasha, OK.Â  He graduated from Chickasha High School in 1972.Â  Miles married Ruth Ann Goss on June 4, 1976, God blessed their home with 3 beautiful children.Â  On May 24, 1988 God chose to take Ruth Ann home. On June 29, 1988 Miles married Rebecca Ann Roberts and to this union God gave 3 more children. Milesâ?? family was the most important thing to him followed by his Church family and friends everywhere. Now let us talk of his job dedication at Tulsa Tube faithfully for 31 years, 6 months, 3 days with perfect attendance for the past 19 Â½ years and no tardies â?? what a record â?? it was important to him to provide and care for his family. If you knew Miles, you knew he loved to play the bass guitar and was known to be among the best of them. He loved to fish and spend time with his family. For hobbies, I guess it could best be said â?? he collected friends â?? he sure knew how to do that â?? because he was a friend to everyone and everywhere he went people fell in love with him.Â  He was just that kind of man. Life was not always easy for Miles, but he never complained and it seemed as though he could always see the good side of everybody and everything. One of his favorite sayings was â??It will come out in the washâ?. He overcame a lot of hard blows with that attitude about life. In June of 2008 he began what he would define as â??the longest, hardest trial of my lifeâ?. He continued to work thru December 2009 and what a struggle that was. He could never accept the fact that he wasnâ??t able to work and up to the Thursday morning before his passing he wondered â??would he be able to load those trucks and woke dreaming he was loading a truckâ?. Later that morning big changes began to happen. The nurse came to visit him and felt the need for him to return to the hospital.Â  On Friday morning he returned and surrounded by his loving children and loving & faithful wife, other family members & friends; they waited for his final flight.Â  On Saturday morning January 14, 2012 at 1:03am Miles won the victory & received his healing of which he never doubted would surely come. Â  He is preceded in death by his parents Billie and Ophelia; 2 brothers, Jeffery Lynn & Charles, & his first wife Ruth Ann Goss Scott. Â  He is survived by his wife Rebecca Ann, his daughter Meshia Clark & husband Jerry of Prague; son Casey Scott & wife Kristy of Sand Springs; daughter Michelle Scott of Tulsa; son Jason Scott & wife Jessica of Sapulpa; son Ryan Scott & wife Jessica of Tulsa; and daughter Katie Ann of the home; & 9 grandchildren. Brother Mark & wife Kayla of Sand Springs, sister Nadine Rogers & husband Geryl of Inola; twin sisters Kathy Pearson of Skiatook & Polly Bolding of Tulsa; sister Sabrina Hughart & husband Mike of Sand Springs. And uncountable nieces & nephews. Including great & great great. Rebecca wants to thank all of you for being a Blessing to our family.Â  Whatever you did from the smallest to the largest if it was mowing my front yard, raking the leaves, or furnishing meals or the unmeasurable blessings you bestowed on our family. I know God will bless you because I pray every day for God to Bless those that have Blessed us. A special thanks to all the staff and doctors on 7 west at St Francis, at Clarehouse & St Francis Hospice.Â  You became our second family.

The family of Miles Marvin Scott created this Life Tributes page to make it easy to share your memories.