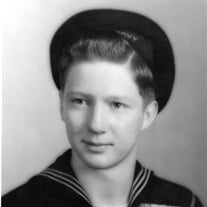 Obituary Myron Ronald McKinley, 92, of Tulsa, Oklahoma died March 18, 2020. He is survived by his wife of 68 years, Margaret Elaine (Johnson) McKinley, three children, Deborah (McKinley) McMahan of Tulsa, Oklahoma, Diannah McKinley and husband Don Carrico of Tulsa, Oklahoma, and John McKinley of Bartlesville, Oklahoma. Survivors also include four grandsons and seven great-grandchildren: Brandon Neal (Krista) and children Kaich, Elizabeth, and Zoe of Stillwater, Oklahoma; Eric Neal (Heather) and children Wyatt and Cora of Ft. Gibson, Oklahoma, Ethan McMahan (Megan) and children Isla and Hadley of Monmouth, Oregon; and John McKinley II of Stillwater, Oklahoma. Survivors also include a sister, Virginia (McKinley) Slimmer of Plainville, Kansas. Myron was born August 10, 1927 at the McKinley farm home in Kiowa County Kansas, three miles north of Mullinville. He was the seventh of eight children born to John Willis McKinley and Virga Mae (Pridy) McKinley. He had red hair, as did his mother, father, and all of his siblings. They were known as the red-headed McKinley family. They were also a family that understood the work ethic, for most of the food for their table was produced on their farm, and all of the family participated in that production. Although they were probably considered poor, Myron stated that they didn’t realize they were poor, for they were a happy family built on self-reliance and support for each other. Lessons learned in the growing up years served all of the family well. For the first eight years of his formal education, he attended Forest Grove School, a one-room school house located one and a half miles northeast of the McKinley home. He attended Mullinville High School and graduated in 1945. Following graduation he entered the United States Navy and served for a year during the latter months of World War II. He attended Fort Hays Kansas State University, from which he graduated in 1950, and spent one year on post-graduate work at Kansas State University, Manhattan, Kansas. On August 3, 1952 he married Margaret Elaine Johnson of Kanona, Kansas. They became parents of three children: Deborah Lynne, Diannah Marie, and John William. Because dairy cattle were an important factor in the family food supply and income when he was growing up, he developed an interest in dairying; and, as a result, became associated with the Southwest Milk Producers Association, a dairy farmers’ cooperative, in 1952. From there, he was employed by the Akron Milk Producers Association, a dairy farmers’ cooperative in northern Ohio. As a result of his experience with the dairy farmer cooperatives, he was employed by the Dairy Division of the United States Department of Agriculture in Tulsa, Oklahoma, in August 1957. He ascended to the position of Assistant Market Administrator of seven Federal Milk Marketing Orders located in Kansas, Missouri, Oklahoma, Texas, and New Mexico. In January 1979, he was appointed by Secretary of Agriculture Robert Bergland to the position of Market Administrator of the Eastern Ohio-Western Pennsylvania Federal Milk Marketing Order with offices in Cleveland, Ohio and Pittsburgh, Pennsylvania. In July 1983 he was appointed by Secretary of Agriculture John Block to be the Market Administrator of the Chicago Regional and Indiana Federal Milk Marketing Orders with offices in Chicago, Illinois, Indianapolis, Indiana and Madison, Wisconsin. Myron retired from the United States Department of Agriculture in January 1997 and, following retirement, he and his wife returned to Tulsa, Oklahoma to be closer to their children. Except for consulting work, he and his wife, Margaret Elaine, who he fondly referred to as the family CEO, used retirement years for the benefit of their family. Volunteer time was directed toward the American Red Cross, the Tulsa Eastside YWCA, and their neighborhood Methodist Church.

The family of Myron Ronald McKinley created this Life Tributes page to make it easy to share your memories.

Send flowers to the McKinley family.